This exciting young seven piece fiddle combo from Finland and Norway was a huge hit at the Mission Folk Festival and the Rogue Folk Club last July. We are delighted to bring them back for another evening of scinitllating fiddle tunes from Scandinavia and beyond. 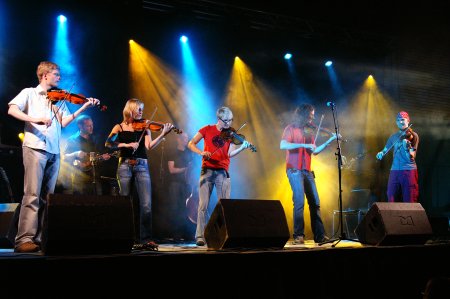 For some reason, Kaustinen, a cluster of villages in the Ostrobothnia region of western Finland has long been known for producing an inordinate number of excellent fiddle players. In recent years, this mysterious fiddling force has been augmented by the fact that local fiddle hero Mauno Järvelä decided to teach fiddle to all the kids in the area who wanted to learn. Now the region is a hotbed of playing, tune-writing, perform- ing and arranging. The seven-piece, Finnish-Norwegian band Frigg includes three musicians from this area, all relatives of the aforementioned fiddle teacher: daughter Alina (fiddle), son Esko (fiddle and harmonium) and nephew Antti (fiddle and double bass). The band's rhythmic cushion is added by two other Finnish band members - Petri Prauda (mando- lin, cittern and Estonian bagpipes) and Tuomas Logrén (guitar and dobro - a new sound to Finnish folk music. Its zipping, curling sliding sound weaves among the fiddles so naturally.) MORE fiddling - I say you can never have too much of a good thing - is added by Norweigian brothers Gjermund and Einar Olav Larsen, playing both ordinary and Hardanger fiddle, the Norwegian violin with sympathetic strings.

With their galvanic live shows, and the 2005 second album, Oasis, building on the buzz caused by the 2002 debut album Frigg, the band have been catching ears on both sides of the Atlantic. For example, during the recent US tour an appearance on Garrison Keillor's famous networked radio show A Prairie Home Companion had the studio audience baying for an encore. That's the way it's turning out wherever they play.

The band's name comes from the Norse goddess of Marriage and Fertility, and the music they make really is a union of two Scandinavian folk traditions, which - with touches of American styles - gives rise to something altogether new. The sound that Frigg delivers can only be described as uplifting. If you've ever listened to Vasen or JPP you'll have an idea, but this band loses all the dark and brooding edges. The music almost always has an undulating quality - a wave-like rise and fall that follows a larger plan of giant swells and sudden calms. The melodies soar while the rhythm skips and grooves along. If you saw them at the Rogue or the Mission Folk Festival last year, you'll know that dancing is pretty much inevitable.

Maybe one of the comments on their website guestbook says it best, ... "I have both your CDs, and I listen to them daily. Your music makes me feel like I could fly. I've never heard anything as beautiful in my entire life."