The only folk singer to sell-out next door to a naked mud-wrestling show. 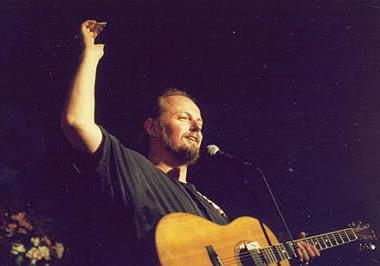 "The greatest interpreter and vocalist performing in the contemporary folk scene." — Sing Out
"I have found strength and comfort in his songs. This is good and rich and big music. Welcome one and all. Come on in. Get down." — Greg Brown

Born in Hamilton, Ontario to parents of Nova Scotian descent, Garnet Rogers spent many hours in front of the old floor model radio listening to Grand Ol' Opry broadcasts and harmonizing with his brother, the late folk legend Stan Rogers. By the age of 8 he was playing Dylan's "Desolation Row" on ukulele. He soon moved on to teach himself the flute, violin and guitar. At 18, Garnet was on the road as a full-time working musician with Stan. Together they formed what has come to be accepted as one of the most influential combos in the history of North American folk music. Garnet acted as producer and arranger for his older brother from 1973 to 1983, when Stan died tragically in a plane fire.

Since then, Garnet has courageously established himself as a formidable solo artist. Hailed by the Boston Globe as a "...charismatic performer and singer — one of the major talents of our time," they continue by saying that "Garnet's vocal and instrumental talents are complimented by an undeniably powerful physical presence — close to six and a half feet tall — with the lungs to match." With his "smooth, dark baritone" (Washington Post) his incredible range and thoughtful, dramatic phrasing, Garnet is widely considered by fans and critics alike to be one of the finest singers anywhere. His music, like the man himself, is literate, passionate, highly sensitive, and deeply purposeful. Cinematic in detail, his songs give expression to the unspoken language of the heart. An optimist at heart, Garnet sings extraordinary songs about people who are not obvious heroes and of their small everyday victories. As memorable as his songs, his humour and lightningquick wit move his audiences from tears to laughter and back again.

Garnet Rogers has been playing at the Rogue since 1987, returning every 12 to 18 months for over two decades now. His wonderful baritone voice and incredible road stories tend to make one forget just how great a guitar player the big man is. His latest CD, Get A Witness, was recorded live at the excellent Black Sheep folk club in Wakefield, Quebec, and has a wide variety of music on it, ranging from a soul-stirring new version of Night Ride to a tribute to the late Coretta Scott King (MLK's widow) - Good & Faithful Servant - and a scorching indictment of George W. Bush - Junior. Hop on board the emotional roller coaster with one of our finest songwriters.

If you think you know what hungry feels like, you should try it full-time. Support your local food bank. We ask that audience members bring donations of nonperishable food and useful personal care items such as shampoo and toothpaste. We will have a box at the show, to be sent to the Vancouver Food Bank.