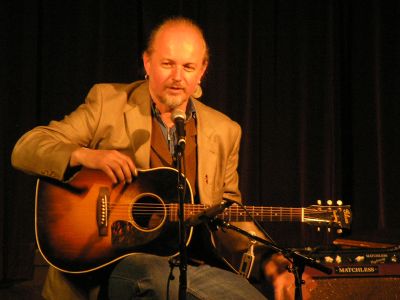 "I have found strength and comfort in his songs. This is good and rich and big music. Welcome one and all. Come on in. Get down." — Greg Brown

One of a pair of brothers who spearheaded a tremendous renaissance in Canadian songwriting in the 1970s and 1980s, Garnet Rogers tells detailed stories of people from all walks of life and their small, everyday victories. He can shift from seriousness to razor-sharp wit in a heartbeat, and no two of his shows are the same. Nearly six and a half feet tall, he has a striking stage presence. Says Dirty Linen: "He knows and captures what is real and lasting--the joyous, contradictory poetry of living," and Canada's Kitchener Record praises Garnet's "visionary songs of haunting and mysterious power."

Garnet's shows are full of enthralling road stories, illuminated by his brilliant guitar work and underlined by his powerful baritone voice. He's been a Rogue favourite for over 22 years, and with good reason: great entertainment! At Garnet's request, please bring nonperishable donations for the Food Bank. We will have a collection box at both entrances to the Hall.