"An exquisite weaver of story-songs that strike at the heart of personal experience . . ." — No Depression magazine 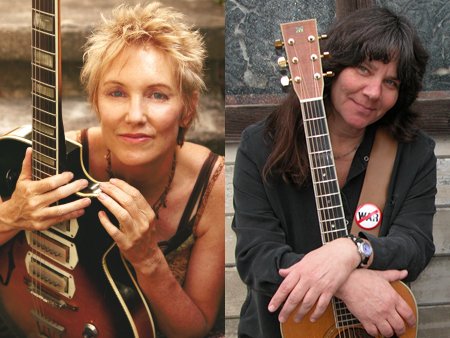 Over the course of 13 albums, Eliza Gilkyson has built a reputation as one of the most original and influential troubadours of our time. Join her and the superb Nina Gerber as they kick off the cross-Canada "Roots on the Rails" tour!

At the Folk Alliance conference in February, Eliza gave the keynote address, in which she spoke about the role of the troubadour as an essential mirror for society to see where we are, what we are doing, and what we need to do to put things right. She defined this role succinctly and with great power and passion. She illustrated her speech with songs and anecdotes. She instilled a belief amongst all of us in that room that we - performers, presenters, media, and audience members - all have a vital part to play in these troubled times. We need music, and inspirational singers, more than ever. Far from being preachy, she was just pointing the way forward and pointing out just what a dreadful mess we've made of this beautiful world.

Beautiful World, of course, is the title of Eliza's new CD on Red House Records. It's her most impressive recording to date, replete with songs of hope and inspiration. Eliza's voice, once described as "honey on sand paper", is the perfect vehicle for her songs. She not only sings, but also speaks, with a voice that draws one in, compels one to listen, to pay attention, and to feel both at ease and empowered. For me she's like a sort of musical Mark Twain or Kurt Vonnegut Jr. She is a wonderful communicator whose words are infused with wit and wisdom.

She came by this gift honestly, as they say. Her father, Terry Gilkyson, was a celebrated songwriter (Maryanne, Green Fields, Bear Necessities, Memories Are Made Of This, and many more.) Eliza has been recording for many years, but her move to Red House in 2000 sparked this most creative surge in her career. Hard Times In Babylon, Lost & Found, Land of Milk & Honey, Paradise Hotel, and the live CD Your Town Tonight, are all brim full of memorable, singable songs of substantive import and vivid imagery.

It is no surprise that she wins so many songwriting awards - she swept the board with no less than 4 at the Folk Alliance in 2006 and three more in her home town of Austin, Texas, that same year. Joan Baez has just covered two of Eliza's songs on her new CD. When Eliza Gilkyson sings, people listen.

We are in for an extra special treat this night, as Eliza will be accompanied by one of the most talented and creative guitar stylists around. Nina Gerber is a musician of impeccable taste and mind-blowing ability. She can play any style of music, and is one of those musicians who is constantly pushing her own boundaries, testing herself, creating sublime music in the process. I took this photo of her at the Edmonton Folk Festival this year, in a guitar workshop with Don Ross, Andy McKee, and Habib Koite - amongst others. Nina jammed with all of them, and held everyone enthralled throughout. Don't miss this show!