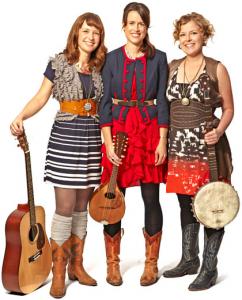 Funny and upbeat, with just a pinch of sass, the Good Lovelies' textbook three-part harmonies, constant instrument swapping and witty on-stage banter have enlivened the folk music landscape since they joined forces in 2006 for their first show at Toronto's funky Gladstone Hotel.

Let the Rain Fall, their third full-length album, was recently nominated for the 2012 Juno for Roots/Traditional Album of the Year. With equal parts city and country, highway and home, wistfulness and sass, the Good Lovelies' good humour and self-assurance shines through from the toe-tapping start of "Made for Rain" to the sweet final notes in the French-flecked "Mrs. T." In between, you'll hear reflections on urban imperfections with "Backyard", straight-up love songs like "Best I Know" and upbeat numbers like "Kiss Me in the Kitchen."

The latest album, like the Good Lovelies, has a universal appeal, sure to please not just their fellow Canadians, but those south of the border and across the pond too. The Lovelies are: Kerri Ough (banjo, vocals), Sue Passmore (guitar, vocals) and Caroline Brooks (mandolin, vocals). Their Rogue debut last year was sold out! Be warned.