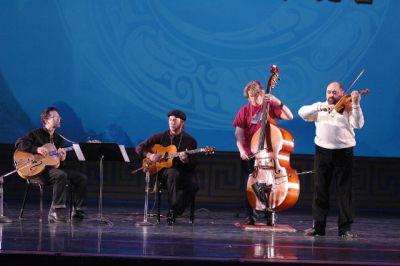 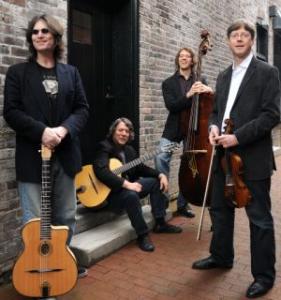 Before leaving his homeland, Lache Cercel was one of Romania's premier musicians. From a musical family, he trained at the Academy of Arts in Bucharest, became a soloist with the Radio and Television Symphony Orchestra and, in 1986, was awarded the "Artist of the People" Citation by the Romanian government. Since settling in Canada in 1998, he has furthered his musical studies at Vancouver Community College and collaborated with musicians from a diverse range of backgrounds.

Cercel's music is firmly rooted in Roma tradition, styled with Doina Klezmer, Middle Eastern and European sounds, and held together with jazz improvisation. He calls his fusion Roma Jazz or Roma Swing. Cercel spent his early years in Canada doing solo performances around BC and teaching Romanian style violin. He brought his band to the first two April In Paris festivals, and we are delighted to welcome him back. The Roma Swing Ensemble also includes gypsy guitar wizards Don Ogilvie and Steven Nikleva, and bassist Sam Shoichet. There will also be guest appearances by gypsy dancers as well as chanteuses from Bosnia and Russia. Can't wait!!

Van Django is an acoustic string ensemble whose music is well-rooted in the gypsy jazz of 1930's Paris France, but beyond that it's all pure blue-skying; flights of dazzling fancy, driving rhythms and boundless creativity. The quartet was formed in 1998 and is made up of four of Canada's most talented and eclectic musicians- violinist Cameron Wilson, guitarist Budge Schachte, guitarist/cellist Finn Manniche and bassist Laurence Mollerup.

Since the group's formation they have toured throughout Canada and more recently, are making inroads internationally with forays into the US and abroad, including a European tour in May 2009. They have twice been featured guests of the Seattle Symphony Orchestra and have performed in a shared concert appearance with the John Jorgenson Quintette at "Djangofest Northwest" in Western Washington September 2008 as well as a return performance in September 2009. The members have collectively played on over 30 feature film soundtracks as well as collaborations with well known Canadian and international music artists. They have been featured regularly on CBC radio and released their debut CD "Tiptoe Trip" in 2006. The group recorded their 2nd CD for release in 2010. Experience this foursome playing their original compositions and quirky arrangements in an action packed musical universe they call, "acoustic string hot jazz!"