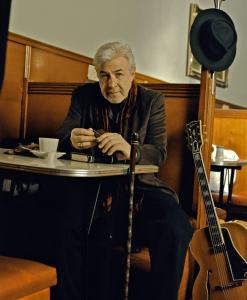 The repertoire, mostly blues traditionals but with three Byrnes originals and a song by Dawson, sounds like what you might hear at a musical get-together in a Mississippi small town. Singing the traditional Bootlegger's Blues, performed as a hoedown swing tune, Byrnes's voice sounds like that of a backwoods moonshiner. He evokes another part of the American South with Robert Johnson's From Four Until Late, which moves like a New Orleans Mardi Gras parade song. — The Vancouver Sun

Everywhere West marks the fourth collaboration between Juno Award winners Jim Byrnes and musician/producer Steve Dawson. Fans of their previous work can rest assured that the intricate acoustic melodies, dirty blues guitar, funky organ and passionate interplay that we've come to expect when the two men get together in the same room are here in spades. If anything, the conversation goes a little deeper this time around and the playing is more assured and trusting than it's ever been before. Listening to some of the tracks from the album, it's obvious that Jim is thrilled with the results.