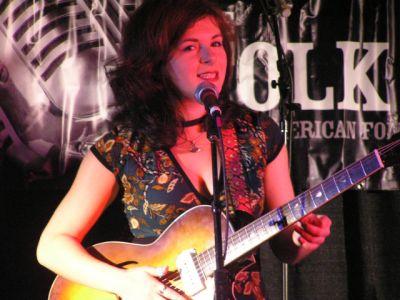 "As a 65 year old lawyer who has been in jazz and blues clubs from Greenwich Village to Yonge Street to Bourbon Street to San Fran for over 45 years, I was just blown away by what I have just seen and heard in 30 minutes tonight! Wow! You've been to the Crossroads and you got all of the devil's tunes! And then your own words, personality and Foy's foil made them all better! I turned to my partner after 15 minutes and said that I hadn't heard such down home raw talent since my previous reincarnation in the 1930's!" — Neil Robertson, a fan.

Little Miss Higgins was born in Brooks, Alberta, and raised in Independence, Kansas. Music entered her life early. "When I was about four my dad bought this old piano at a local bar," she recalls. "It was a mini grand piano. He brought it home and told me it was mine. I carved my name in the side and started taking piano lessons." Growing up playing piano, Little Miss Higgins (aka Jolene Higgins) now uses guitar and voice as her main instruments as well as her theatre background to bring a "refreshing sound and story to the stage."

Her stage name, Little Miss Higgins suits the undeniably inflammatory mix of her blues and country music repertoire but the moniker was largely accidental. "When I moved to Saskatchewan I made friends with this crazy Greek guy," she recalls "He started calling me that, and it just stuck. I started using it on posters around 2002." Over the past five years, Little Miss Higgins - described as a "pocket-sized powerhouse" by Richard Knechtel in the Owen Sound Sun Times - has built a strong national reputation throughout Canada, appearing in clubs and on festival stages in Edmonton, Winnipeg, Montreal, Owen Sound, and Canso, Nova Scotia performing traditional songs but also her own original music that picks up on blues styles of the past, but remains very much her own expression. As a songwriter, she has been influenced by a range of artists from Memphis Minnie, Billy Holiday, and Big Bill Broonzy to Joni Mitchell.

Her studio albums "Cobbler Shop Sessions" (2006) and "Junction City" (2007) superbly showcase Little Miss Higgins as a highly-developed songwriter as well as a remarkable country blues performer in a style gracefully highlighted by her partner, guitarist Foy Taylor. Last year she released a live CD "Live: Two Nights In March", which indicate what a fine, and unique, entertainer she is!