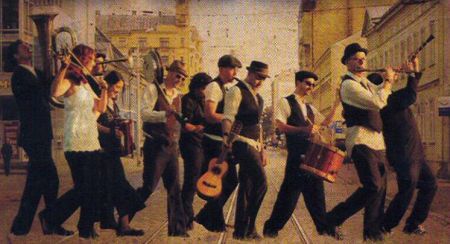 Viva Tom Landa: Vancouver's Mexican- Canadian musical revolutionary! Since coming to our fair city in the early 1990s from Sudbury, Landa and his band The Paperboys have blazed a trail for a musical mélange he calls "Stomp", incorporating Celtic music, bluegrass, and an increasing amount of Latin American music. The latest line-up of the band - now known as Los Paperboys - includes Spirit of the West founder Geoffrey Kelly on flute and whistle, Brad Gillard on banjo, and hot young fiddle protégée Kalissa Hernandez, from Victoria. There is also a brass section, which boasts young Cuban-emigre Miguelito Valdez, who learned his trade in Havana with the Buena Vista Social Club, and who now leads his own excellent combo, Puro Son. With Nick La Riviere on trombone and Kareem Kandi on sax this manifestation of Los Paperboys will definitely kick! But don't be misled by the size of the band and the "Stomp" moniker. This is far more than a rocking dance band. Los Paperboys balance things out with some soulful Latin grooves, delectable Celtic airs, and compellingly topical songs - many of them original compositions.

Tom Landa and Los Paperboys have won Juno and West Coast Music Awards in their illustrious past. This new Celtic / Latin fusion combo released a brilliant CD, "Callithump", in August. It was produced jointly by Landa and revered Victoria musical visionary Joby Baker - who played bass at The Rogue last month with Lester Quitzau. As its title implies, it's hot, and it packs a punch. There are some scintillating Celtic / Latin fusion dance numbers and also some melodic, more introspective songs. Having heard them a few times in concert in recent months, I'd venture that they could be well on the way to winning more awards - and more importantly - winning over even more fans.