"This is the sort of sound you'd want to hear pouring out of roadhouses as you drive up expecting to get drunk and maybe fall in love." – Americana UK Magazine 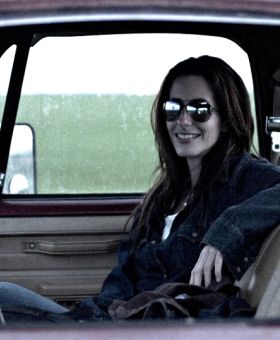 "It's no secret that the country/roots scene is flled with beautiful voices pining over the man that done her wrong, but Romi makes you think she's run over a few men in her time and sure as shit isn't waiting around for the ones that left her behind."

Winnipeg's Romi Mayes (Raw-me Maze) has a reputation as a gritty, raw, hard-workin' , hard-drinkin' woman..... and all that may be true. But it's also true that she can move you to tears with her honest songwriting, make you laugh with her wit, and entice you with her sweet set of pipes.

Romi writes about the road, about love, about sex, and about drinking, drugs and heartache. She's spent endless hours on the road away from her daughter living like "one of the guys", and that's why you never question the innuendo or the swagger. But she's just as legitimate when she opens up and wears her heart on her sleeve on songs like I Won't Cry; you just can't doubt her sincerity. According to producer Gurf Morlix, "She's got the flint and she's got the steel... everything she needs to take her anywhere she wants to go."

She has just fnished a new cd "Achin in Yer Bones", and for those of you that loved her last release (Sweet Somethin' Steady), you won't be disappointed. Relentless touring and growing confidence has led to real growth as both a musician and a songwriter. The new album is her second endeavor with Texan producer Gurf Morlix (Lucinda Williams, Mary Gauthier.) The result is a dynamic, rich album with less of a bluegrass feel, and more of a gritty, bluesy edge. (It's the best thing I've heard this year, says Steve Edge, fabulous songs and tasteful arrangements. Sure this band can rock, but they can also groove. The piano player moves like Joe Cocker and really feels every note. The bass player is pretty animated, too. This will be a fun show, cos Romi has the sort of voice that could charm - or snarl - its way through the most hardened of hearts!) 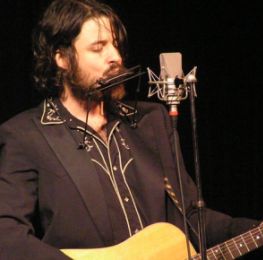 The show will open up with a solo set by North Vancouver troubadour Dustin Bentall. (He might even do a few duets with his good friend Romi). You may have seen him with his legendary father Barney in that wonderful show The Grand Cariboo Opry.

Barney encouraged him gently as a boy, "There's no question I've learned more from him than anyone else in the business. He never pushed the guitar on me but was always there to answer any questions I had, and left the actual learning up to me. I spent a few years wishing he had cracked the whip a little more but I have come to realize that the style I have developed has been a product of my own chosen influences."

Steeping himself in the "Cosmic American Music" of Gram Parsons, The Flying Burrito Brothers and the Byrds from an early age, Dustin definitely has a "narcotic Cowboy" edge to his sound. He also comes across as someone who's packed a lot of living into his 22 years. His music is full of beautiful scars that are described for you through bleary eyes. The recordings ring with integrity and an uncompromising lust for life.

"For the most part the songs are all true stories. I've always envied those who can make up stories for songs. I can't do that very often or very well. Whether living out in the country, downtown, uptown, across town, or on the road I've always enjoyed living as various alter-egos or in parallel lives so to speak. I love to meet people from all walks of life so I can relate in as many situations as I may end up in. Most importantly I like to keep my own life colourful. That's all I got and I don't like grey."