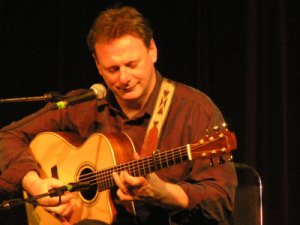 To find a unique voice on so ubiquitous an instrument as the acoustic guitar is quite an achievement: to do so within a centuries old idiom where the instrument has no real history is truly remarkable. In little over ten years as a professional musician Tony McManus has come to be recognized throughout the world as the leading guitarist in Celtic Music. From early childhood his twin obsessions of traditional music and acoustic guitar have worked together to produce a startlingly original approach to this ancient art. In Tony's hands the complex ornamentation normally associated with fiddles and pipes are accurately transferred to guitar in a way that preserves the integrity and emotional impact of the music. 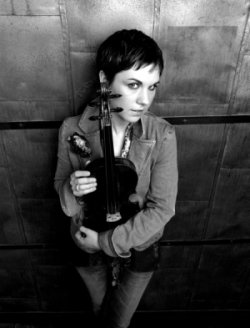 When you see twenty-seven year old April Verch perform, the first thing that strikes you is the pure energy that infuses her fiddle playing and stepdancing. When you listen to Take Me Back, her third disc for Rounder Records, though, what draws you in are more subtle things-her confident, winsome singing, the finely detailed elegance of her fiddle phrasing and the depth of a repertoire that ranges through material from Americana mainstays Buddy and Julie Miller, to simple country songs and rollicking tunes from her native Ottawa Valley to sparkling original instrumentals. Like its predecessors, Take Me Back is rooted in a deep musical tradition, yet it also serves notice that April Verch has taken a bold step forward and stands on the threshold of a new and exciting stage of her career. 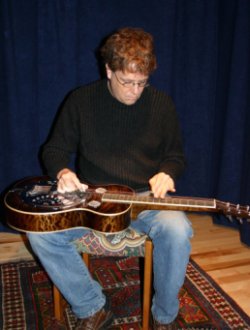 Doug Cox is a roots music renaissance man. From his bucolic home in the Comox Valley on Vancouver Island the slide guitar and dobro master has carved-out an amazingly diverse career as a recording artist and touring musician who has played festivals, clubs and concert halls across Canada and the United States and around the world from Dobrofest in Slovakia to the Baseball Hall of Fame in Cooperstown, New York.

By Alexander Varty
Published in The Georgia Straight on November 8, 2007 [Original Article]

As far as Scottish-born musician Tony McManus is concerned, moving to Canada has been an overwhelmingly positive experience, with one small exception. Back in the U.K., he was considered one of the top performers in the Celtic-roots idiom; in his new country, he has to content himself with being the second-best-known guitarist on his block.

Of course, when that block is located in the bucolic artists' community of Elora, Ontario, and your neighbour is Norah Jones/k.d. lan s a slight you willingly accept.

"I live directly across the street from Kevin, and it's fantastic," McManus says, laughing. "He has three kids and we have a little guy who's two years old, and they all play together. I just think it's going to be really funny when my guy gets a bit older and realizes that not everyone's daddy is a guitar player."

So far, McManus reports, he's only had one chance to sit down and play with the busy Breit. But he's not lacking for Canadian contacts: when the Georgia Straight catches up with him, he's quaffing coffee in Regina the morning after the on-stage debut of Strung, his new trio with Ottawa Valley fiddler April Verch and Vancouver Island Dobro master Doug Cox.

"It was great," he reports. "We were ensconced in a hotel for a couple of days, just swapping tunes and getting a feel for each other's music, so it was brilliant to actually get up and play in front of a room full of people."

Two days doesn't seem like a lot of prep time for a brand-new band, but Strung's three acoustic virtuosos aren't too pure to take advantage of digital technology. Before convening on the capabilities to the utmost.

"We've each thrown three or four tunes of our own into the ring, and then we've found a couple of bits of common ground," he explains. "But this is the first time in my life I've ever played anything remotely Hawaiian, which was one of Doug's contributions. And for our second number we're playing this slow, melancholy tune from Greece that uses a completely bizarre scale, and we're improvising on it as well, so everyone's getting a workout."

For McManus, playing with Verch is a particular pleasure. "She's very young, she's very energetic, and she's really focused on what she does," he notes, adding that he's starting to realize there's more to Canadian fiddling than the ancient Scottish strains of Cape Breton. In turn, he's been able to introduce the blues- and bluegrass-rooted Cox to some Irish hornpipes – including one written by that rarest of creatures, an Irish Dobro player.

"I normally play the melody on that," he says of Frankie Lane's "An Droichead Beag". "But Doug plays it so beautifully I just sit back. A s a nice aspect of this band, too: you're hearing these tunes afresh, even though you've been playing some of them for years. We're all having to adapt our own techniques to try and fit in with other people s music in an appropriate way, and so far it's been great fun."