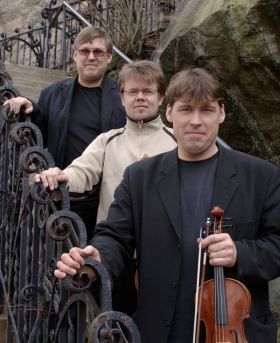 In the early eighties, a group of young fiddlers from the tiny Finnish village of Järvelä began making some noise in local folk music circles. Järvelän Pikkupelimannit ("Little Folk Musicians of Järvelä") - aka JPP - descended from a line of folk musicians going back to the late 1800s. Performing folk tunes from those villages, they attracted attention with their arrangements (most folk tunes at that time were played straight with no embellishments), their harmonies, new compositions, influences from Swedish folk music and their youth (ages 17-25). Also significant was the fact that they started to play folk tunes from all over Finland, not just from their own locale, which was the standard practice. The first big break for the group came when they landed first prize at the Finnish Championship Competition for Folk Music Groups in Mäntsälä, Finland in 1982. At this time the band consisted of: Arto Järvelä (fiddle, octave mandolin), his Brother Jouni Järvelä - acoustic bass, brothers Jarmo and Juha Varila - fiddles, and Timo Alakotila - harmonium. Success at the Mäntsälä competition led to instant national fame with gigs all over Finland and soon they were playing in Sweden.

Hans Kennemark (fiddle, viola) first met Arto & Timo at the Kaustinen Folk Music Festival in Finland, 1984. Hans' band at the time was Forsmark III and their concerts and jams made a big impression on all concerned. Since then, sporadic meetings and jams, all fun and fruitful, inspired them to do something together as a real live band. This vision eventually took shape in the fall of 2003 when the trio had their first rehearsals in Finland. After the second meeting in January 2004, at Hans' home in Gothenburg, they were ready to make their debut concert. The first show was an instant success with audience members rushing to inquire where they could get hold of the album. Arto and Hans adapted traditional tunes from Sweden and Finland and composed new tunes for the trio. All brainstormed together under the Nordik Tree. After recording and mixing and two years of requests from eager fans, finally an album was ready.

This concert will be their Canadian debut, before they head over to Island Music Fest in Courtenay for the weekend. It's a must for anyone with Scandinavian roots, an interest in traditional fiddle music, and / or a healthy appetite for new music, innovation and virtuosity.