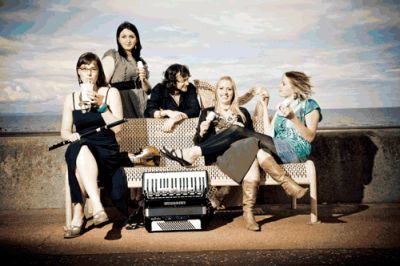 Featuring a multinational line-up from Scotland, Ireland and Canada, The Outside Track plays cutting edge modern traditional music reminiscent of early Solas with a Canadian singer and a hint of the Poozies with the occasional bluesy edge.

All members of The Outside Track are instrumentalists, arrangers and composers in their own right. Since meeting in Limerick in 2005, their sound has developed into a unique sonic fusion of harp, guitar and accordion bass accompaniment coupled with intricate interplay between fiddle, flute and harmony vocals. These "inspired arrangements" draw on diverse material from classic ballads, new songs, self-penned originals and traditional instrumentals from their native countries.

The Outside Track has "several things going for them, aside from youth and talent. The first is the range of musical influences and material each one of them brings to the band; the second is a lack of inhibition in mixing them all up and the third is the fabulous lead vocalist, Norah Rendell." (Rock 'n Reel magazine, UK)

"A precociously talented group of musicians where the singing and playing is of the highest standards and the overall mood one of joyous exuberance." (Maverick Magazine, UK)