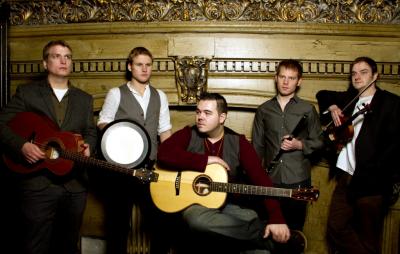 The best band of their generation - The Living Tradition

Since being awarded the title of "Best Up and Coming Artist of 2009" at the MG Alba Scots Trad Music Awards, The Paul McKenna Band have gone from strength to strength touring extensively throughout USA, Canada and Europe. Combining their love for Folk and Traditional music, as well as original songs and tunes; The Paul McKenna Band from Scotland has been captivating audiences with live performances of their new album, Stem the Tide, out now on Greentrax Records. Concert highlights of 2011 included performances at The Cambridge Folk Festival England, Tonder Festival Denmark, Milwaukee Irish Festival USA and Goderich Festival Canada. 2012 got off to a flying start in January, with a headline performance at the internationally acclaimed Celtic Connections Festival at the Glasgow Royal Concert Hall.

With a contemporary approach to songs, although not straying too far from their roots, their arrangements are both fresh and innovative. The exciting sound of The Paul McKenna Band is created through outstanding Vocals, driving Guitar and Bouzouki, intense fiddle playing, a warm pairing of flute and whistles and dynamic bodhrán and percussion. They made their Rogue debut in March 2011 and since then have released their second CD, Stem The Tide, and been reinforced with the addition of ace Scots fiddler Mike Vass.