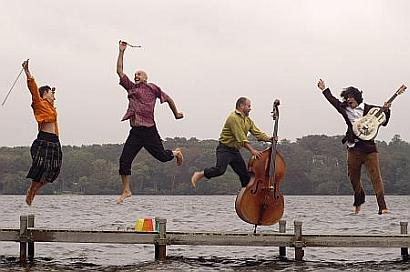 All of roots music is a stage for daisy mayhem, and this four-piece string band loves nothing more than choreographing a jubilant mix of traditional, original, and contemporary sounds. With Rani Arbo's bewitching alto at the helm, stunning vocal harmonies, a 100% recycled drum set, fiddle, guitar, and bass, daisy mayhem "has a grand knack for pumping new blood into old music" (Boston Globe). [Imagine, for example, a pre-civil war song from the Georgia Sea Islands sung over a New Orleans style groove. Or, an old Irish fiddle tune with new lyrics, capped with a solo on a South American box drum. A Sondheim tune done jug band style? An original Unitarian funk gospel song? You begin to get the idea.]

With influences from Doc Watson to Django Reinhardt, from Ghanaian drumming to the funky Meters, and from Fiddlin' John Carson to Bob Dylan, daisy mayhem celebrates America's rich musical past and brings it into the present with good humour, impeccable musicianship, powerful songwriting, and a clear love of playing together. Here are four musicians who pick up what's lying around—from tin cans to old songs and wry observations of modern life—and create something new.

Rani Arbo is the fiddler, lead singer, and founder of daisy mayhem. With an enchanting, expressive alto that is equal parts choir girl, flirty teenager, and world-weary woman, she navigates swing tunes, funky call-and-response songs, and ballads with unusual honesty and ease. Steeped in thirty years of choral singing, Arbo also spent years with a honky-tonk band, a Balkan rock band, and folk-bluegrass band Salamander Crossing. A cellist by training, her swampy, self-taught fiddling draws from swing, blues, and old-time music. On stage, Arbo brings a rich life—as a 15-year veteran performer, breast cancer survivor, mother, and songwriter— into humble and compelling performances. Arbo also has toured and recorded with Joan Baez, John McCutcheon and many others.

Andrew Kinsey began his musical life as the youngest bagpiper in his town. Since then, he has taken up the slightly more socially acceptable double bass, with frequent regressions to the ukulele and banjo. Arbo's singing partner for over fifteen years, his rich, compelling baritone, generous spirit, and rock-solid bass playing keep daisy mayhem glued together. Kinsey's musical and humorous sensibilities inspired the band's debut CD, Cocktail Swing, which romps through vintage country, swing and jazz chestnuts.

Scott Kessel was once a regular (albeit unusually talented) kit drummer—but in daisy mayhem he pilots the unforgettable "Drumship Enterprise," a recycled drum kit comprised of a cardboard box, cat food tins, a Danish butter cookie tin, and a suitcase. Riveting to watch (especially during solos), Kessel mixes up American rock and pop beats with African, Afro-Cuban, New Orleans, and South American rhythms to create the foundation of daisy mayhem's unmistakable groove.

Anand Nayak fell for the guitar as a teenager and has been a lost cause ever since, exploring music and instruments from all over the world. A powerful singer and songwriter with a rare gift for arranging and a gutsy guitar style that draws from a century's worth of jazz, funk, blues and folk masters, Nayak's work features prominently on daisy mayhem's second CD, Gambling Eden and the new CD Big Old Life. Along with Kessel, he is the band's enthusiastic pilot through challenging genre crossings. Nayak is also a recording engineer and producer and performs in a folk duo with his wife Polly Fiveash.