A rare evening of extremely "heavy wood" as Ontario guitar legend Don Ross teams up with Michael Manring, one of the most revered and respected bass players on the planet! 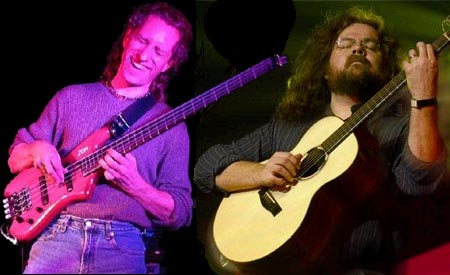 Don Ross played at the Rogue in February to launch his latest CD, "Music for Vacuuming". Needless to say, this guitar wizard is not resting on any laurels, and his seemingly infinite desire to break new ground with his 6 and 7 string guitars sees him team up with the former Windham Hill session bassist, Michael Manring, who has accompanied the likes of the late Michael Hedges and Newgrass stalwarts Mike Marshall and Darrol Anger.

«Seasoned players all over the world use words such as "brilliant" and "virtuoso" in describing these two men. A gracious effort to be sure, but the fact is, no words in any language or scale truly define a Manring or Ross performance, which is exactly what makes them both revolutionary. Unfortunately, the music industry focuses more on marketable value than talent. These two musicians understand the balance yet see only humour in the situation. "Welcome to what your mother told you not to do with your guitar," chuckled Manring as he began his opening number.» — Indy Music Scene, 2006.

This will be an awesome show!