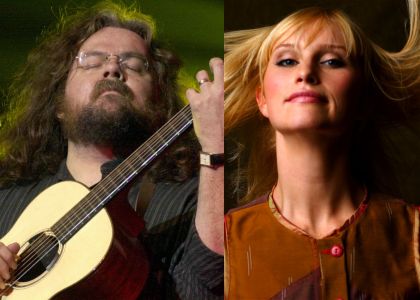 A Rogue Folk Club favorite and a true innovator of guitar composition and technique returns for his yearly visit this October. Don Ross has emerged as one of the most respected musicians in Canada and one of the top guitarists in the world. In September 1996, he managed to do what no other player has done: win the prestigious U.S. National Fingerstyle Guitar Championship for the second time (he first won in 1988). The competition, held yearly in Winfield, Kansas, cannot be won only with immaculate technique, but the player's music must also display a high degree of emotion and intensity - hallmarks of Don's style.

Although Don Ross has played the Rogue numerous times, last year was the first time we were introduced to his partner Brooke Miller – and a fantastic introduction it was! Brooke Miller has the lethal combination of great songwriting, excellent guitar skills and a beautiful voice. She grew up with parents who were eclectic artists and musicians and music simply "soaked," as Brooke describes it, "into my pores." "I grew up with a lot of kitchen ceilidhs," she says, "kitchen parties — essentially just lots of food, wine and music that would go 'til six in the morning playing."

In third grade, she started to play the guitar and soon after, her parents bought her first electric guitar, drum machine and little 4 track Tascam recorder, on which she would create her own records. With two boys, she formed a trio called Bleek that soon owed more to punk, and by 12, was touring the Maritimes, opening for bands like Sloan, Modest Mouse, Mad Hat and Eric's Trip.

But a musician of Brooke's gifts and range soon outgrew the three chord confines of punk and began exploring more sophisticated and challenging techniques and genres — from the intricacies of finger-picking to the more colorful palette of jazz. She also began to take her own voice seriously, rather than, in her words, "scream my head off." In 2007, she released her first album You Can See Everything and went on to win the 5th annual Colleen Peterson Songwriting Award for her song Two Soldiers.