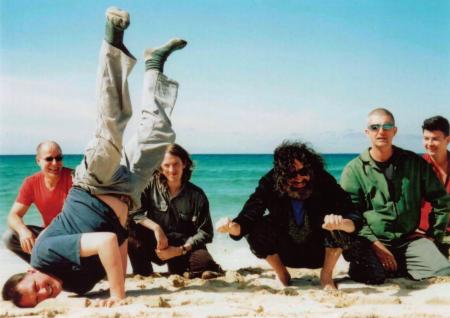 "Stalwarts of the Scottish folk and fusion 'acid croft' scene, Shooglenifty have honed their skills as one of the best live bands on the international circuit. They mix rousing instrumentals, traditionally influenced and played on fiddle and banjo, with more contemporary rhythms, making subtle use of drum, bass and electric guitar, along with occasional samples. The emphasis is on dance tunes, interspersed with more gentle, drifting passages, all underpinned by the solid rhythm section." — The Guardian

They have a hot new CD, "Troots". Don't miss them in the cozy confines of the St. James (Dance) Hall. This will be an amazing evening!

"I'd like to think that if Frank Zappa had been born on say, Benbeccula, this might have been the music he would have chosen to produce." — Keith Witham – Living Tradition magazine

Back in the early 90's, the band that would be Shooglenifty spontaneously bloomed from the ever-fertile ground of the Edinburgh session scene. Five members of the recently deceased "psychobilly" band Swamptrash began meeting up for weekly pub jam sessions. They were soon joined by bassist Conrad Ivitsky and, presto, a band was born. Almost immediately, they were offered a weekly gig at La Belle Angele; "We are the complete opposite of a manufactured band - 100 per cent organic," says guitarist Malcolm Crosbie. "That first gig at La Belle, there were six people there apart from us. It was the middle of winter, and we were all huddled around this electric-bar fire in the middle of the floor. By the time we actually migrated on to the stage, a couple of months later, there were so many people coming that we had to start using a PA. It really was just a session that kept on evolving." "It was two years before we had a rehearsal," says banjoist Garry Finlayson, "and then only because we were due to be making the first album."

The music, in a nutshell, is a unique twist on trad that attacks Scottish-style tunes with a many-layered, inventive, lyrical, groove-based, improvisational, raw energy. There's fiddle, mandolin, acoustic and electric guitar, percussion, samples, programming, banjo, "banjax" (you'll know when you see it), effects, distortion, feedback and, above all, superb musicianship. Somehow, through all that groove, the beauty of the tunes and the sweetness of the melody-playing always manages to shine through. The band's own attempts at classification have coined the household terms: "Hypno-folkedelic ambient trance" and "acid croft" – whatever you want to call it, just know that you won't be able to sit still.

Shooglenifty have just released their 5th album Troots (as in trouts... the fish). It is their second CD with the current line-up in which original bass and mandolin players Conrad Ivitsky and Iain MacLeod have been replaced by fellow Edinburgh scene regular Quee MacArthur and Tasmanian Luke Plumb. The album also features an appearance by Inuk throat singer Tania Tagaq Gillis. We haven't heard the new CD yet, but there are samples available on the band's website.

At their last Vancouver show Angus Grant was heard to remark: "We can see lots of people out there dancing with their eyes closed and smiling. We like that!"