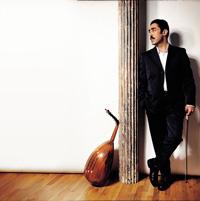 Simon Shaheen is a virtuoso and master of traditional Arab music... a solid introduction to a centuries-old classical tradition. Shaheen was born in the village of Tarshiha in the upper Galilee, and four years later, his family moved to Haifa. Haifa is the only large city in historic Palestine and proper Israel that includs a mix of Palestinians and Jews with a population of 450 thousand, amongst which 55 or 60 thousand are Arabs or Palestinians.

Of growing up as a Palestinian musician Shaheen says, "Living in Israel, I couldn't go to any of the Arab countries. I remember when I was like five years old, playing the oud and the violin, everyone who listened to me used to say 'What a talent, it's so sad that this little boy can't go and play in Beirut and Cairo and Damascus.' You know we're talking about surrounding cities and countries that the borders were closed. I couldn't go there. So one way to fulfill this dream was by coming to the United States in 1980 and as an immigrant, obtaining the citizenship and the American passport, and then and go and visit the Arab countries."