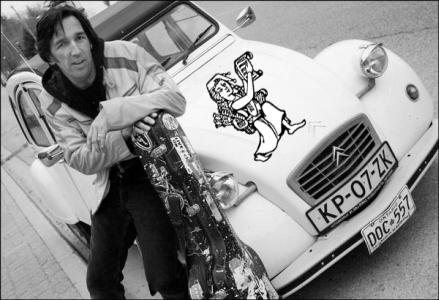 This month we welcome back founding Rogue, Stephen Fearing. His story of moving from Canada to Ireland as a young boy and returning to Canada in the mid 1980s is well documented. From our perspective we've seen him progress through a succession of fine albums, going from the wide-eyed romantic who hopped freight trains and slept in his hammock - which must have swung alarmingly on those trains - to the seasoned road warrior he is today.

Back in 1986 he opened for Peter Case at The Town Pump and released his Yellow Tape. The following year his debut LP, Out To Sea, was launched on Aural Tradition records - then affiliated with the Vancouver Folk Music Festival. Dublin Bay was my Song of the Year on The Edge On Folk, and he also introduced James Keelaghan to Vancouver that year. Stephen & James came along to an Open Mic at The Classical Joint and were astonished to find Willie P. Bennett on stage. Willie was set to play at The Savoy the following night - the last show we put on before the Rogue Folk Club was founded. Sadly, Willie passed away last month.

Stephen launched Out To Sea at The Cultch, and we invited Clive Gregson & Christine Collister to the show. They were playing at the WISE Hall the next night, and were so impressed that Clive offered to produce Stephen's next album, Blue Line, in England.

Advances in technology allowed Steve Berlin (Los Lobos, who are back in town on April 1st) to produce the next CD, The Assassin's Apprentice, and for Richard Thompson to contribute a track by DAT tape. Shortly thereafter Stephen moved to Ontario, where he would team up with Colin Linden & Tom Wilson to record an album of Willie P.'s songs, High Or Hurtin'. This project led to a fine new band, Blackie & The Rodeo Kings, who are still going strong, and who played a stunning tribute to Willie at the Folk Alliance.

Stephen's latest CD, Yellowjacket, is an eclectic mix of solo compositions and collaborations with Skydigger Josh Finlayson. The title track was co-written with Tom Wilson, and refers to a scary brand of caffeine tablets available in the States. It is Stephen's 7th recording on True North records (Bruce Cockburn's label.) On the latest Blackie CD, Let's Frolic Again, Stephen co-wrote a song with Irish singer Andy White, and sings a powerful version of Herald Nix's Night's Black Bridge.

Stephen Fearing is a man with a velvety smooth voice that packs a punch like a vintage Jamieson's Whiskey. He is a monster guitarist and a wonderful entertainer. We are always delighted to welcome back our co-founder - and our very first House Band! Won't you please join us?