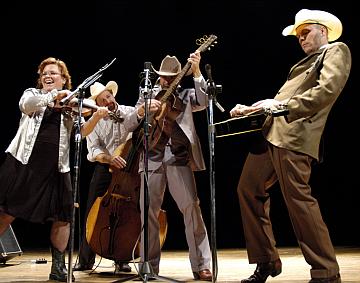 Cash On The Barrelhead

"They just have so much energy!"

This often-heard quote accurately follows a performance by Kansas City's unique hillbilly stringband, The Wilders. This talented group, formed in 1996, is regularly regarded as "the band to see" wherever they go. Led by singer, guitarist and country wisecracker, Ike Sheldon, the band grounds itself firmly in the early formative years of recorded country music. Featured in each performance are the hard driving old time fiddle tunes presided over by multi-award-winning fiddler, Betse Ellis. Her infectious fiddling is often the cause of spontaneous dancing by both the audience and the band!

Vince Brown, Olympia, Washington swing musician recently played Wintergrass and had the following words about his discovery of The Wilders. Follow his advice.

The Wilders – they take the best of country, bluegrass, old-timey and - dare I say it – rock & roll – and play good-time Honky Tonk music like it was meant to be played. This is music the way it was in the 50s juke joints when everything got rollin' just right. I didn't drink a drop Saturday night, but dancing to the Wilders made me feel like I was drunk enough to fall down and regret the morning. If they play anywhere near you you'd be a fool not to cancel all your life's commitments and go. Just go. Nothing will matter after a night with the Wilders.

The Wilders' playlist is peppered with original country, bluegrass, hillbilly songs, and fiddle tunes, and also includes many of the classic country favorites heard in the early days of the Grand Ol' Opry radio show. Songs by Hall of Famers Jimmie Rogers, Roy Acuff and the Carter Family are presented in a faithful yet original light. Anchored by the insurgent walking bass lines of Nate Gawron, the band resurrects 1940's and 50's honky-tonk heroes like Hank Williams and Lefty Frizzell, providing each tune with all the swinging electricity found in the originals without plugging in a single instrument. The finishing touch for the band's sound is produced by the slippery dobro, chugging clawhammer banjo and plunky mandolin of jack-of-all-trades, Phil Wade. While Sheldon and Ellis handle the bulk of the vocal chores, the whole group can sometimes be heard harmonizing on a beautiful old gospel tune.

Witnessing a performance by The Wilders is an exciting experience not soon forgotten. The members huddle around a single microphone. When the time comes for a solo, each player moves with clockwork precision -- they are artists at making each instrument and vocal line mix perfectly through their posture and position in relation to the microphone. There's plenty of unplanned humour as well. Never ones to take themselves too seriously, the band deals with the calamity of a string break or a high-humidity-detuned instrument in an often hilarious way. Because of this natural sense of humour and humility, smiling faces are a familiar sight at any Wilders show!

They have released a DVD and four CDs, with two released since their last - sold-out - show at St. James two years ago. They also released a 10" single on red vinyl last year! The brand new CD is called Someone Has To Pay. We can't wait to see this band again. Great fun!