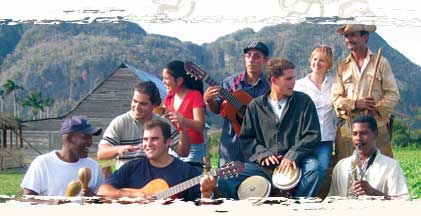 Valle Son is an eight-piece group that hails from Vi–ales, a rural village in the lush tobacco-growing highlands of Pinar del Rio, Cuba. Led by tres guitar, their songs embody traditional son style, while integrating jazz and mambo elements with crooning lead and urging chorus vocals capped by impeccable improvisation and instrumentation.

"Valle Son's musical philosophy sounds much like Cuban music in general, which is known for integrating many styles, from jazz and hip-hop to Brazilian.

'We take traditional Cuban songs and a lot of our own stuff and add something new. The use of bassoon and saxophone makes the sound very different from other Cuban bands,' says Valle Son's Jesus Hernandez Sanchez. 'We like to take our influences from all over the world.'

Even at its roots, Cuban music is a study in fusion. One of the earliest Cuban musical styles, the son originated in the eastern part of Cuba and combines the influence of two musical cultures, Spanish and African, into a style of music many refer to as 'Afro-Cuban'." — Kenna Burima, FFWD Weekly