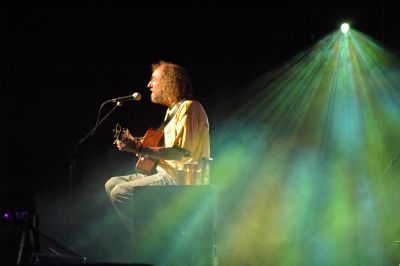 Winner of BBC Radio 2 Folk Awards "Best Live Act" Award 2001 BBC Radio 2 Folk Awards Nominee for "Best Live Act" Award 2007 This international, award winning, singer songwriter is about to embark on his 40th year on the road. Vin Garbutt is one of the best known performers on the music scene today, and one of the most sought- after. It is no surprise. His song-writing is witty and powerful, tackling thought-provoking issues which others prefer to avoid, and he is an accomplished guitarist and fine whistle player.

Vin has been working non-stop since 1969, touring all over the world as well as playing in virtually every part of the UK's "sceptred isle". Despite the years of performing, the songs always remain fresh and vibrant, and the repertoire is always changing. Vin is genuinely funny, and his quirky observations of life are always very much part of the act, delighting audiences everywhere.

"There is no better or more popular performer around," Folk on Tap said of him recently, "the diversity and controversial nature of his powerful, thought provoking self-penned songs performed with passion, integrity and a sincere belief in the subject matter earn him universal respect. Add to this his wealth of traditional songs, fun songs, fine musicianship, a zany rare wit, with introductions which could send his audiences 'rolling in the aisles', and you have the ingredients for the perfect recipe for success."

Powerful, hugely moving, warm, humane, inspired, funny and gut wrenchingly honest. These are just some of the superlatives used to describe Vin's performances this year.

He's played many times at the Rogue since his debut in 1987. A Vin Garbutt show is an unforgettable experience. We live in trying times, and Vin writes about modern problems. Some say that laughter is the best medicine. With Vin you get the unique chance to revel in the humour as well as the pathos of the human condition. If you have seen him before you will definitely want to see him again. If you haven't we urge you take a chance and come along. We promise you that you will not regret it! 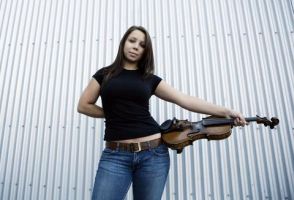 At 20 years old, Victoria's Kalissa Hernandez has received much recognition for her hard work both performing and competing. When she was 12 years old, she made fiddle history by being the youngest person ever to win the title of BC Provincial Fiddle Champion where all her competitors were adults. Kalissa has been invited four times to represent BC at the Canadian Grand Masters (National Fiddle Competition), in Ottawa. She has performed at various Folk Festivals across Canada, both fiddling and stepdancing. Kalissa has been teaching fiddle lessons for a number of years, and has more recently began to teach at fiddle camps as well. She plays a variety of fiddle styles including Irish, Old Time Canadian, Cajun, Texas Swing, Celtic and Metis. Kalissa has won many awards in the classical music world for her violin playing, but mostly just enjoys jamming and sharing tunes! She will be joined by Jeremy Walsh on guitar and vocals for the opening set.