Note the start time for this show is 7pm. 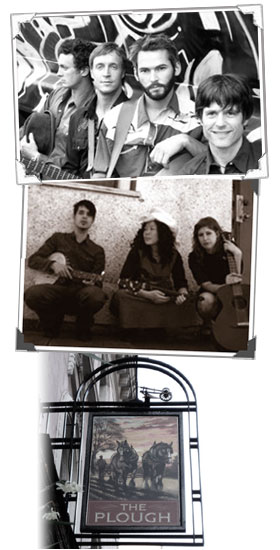 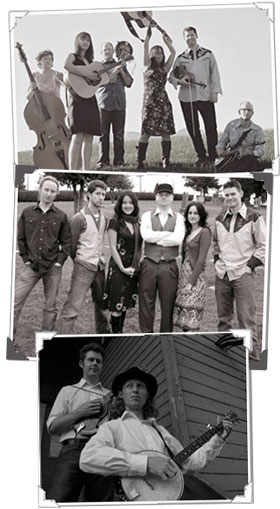 Over the last few years, this city (who knows, maybe the world) has witnessed what can only be termed "a Banjo Explosion". The much-maligned instrument has been part of a renaissance that hasn't been seen since the 60's, and its instrument buddies from the Old-time and bluegrass traditions are coming along for the ride.

After putting on a sell-out, money-raising event at the ANZA club earlier this year, the bands have finished their CD and are ready to release it to the world! The CD features music by Dyad, The Mountain Bluebirds, The Breakmen, Plough, Viper Central and Redgrass. Website: www.whiskeyhollowbound.com

Dyad digs deep into the song and instrumental traditions found in the Appalachian mountain region of the eastern United States. Over 100 years ago, songs were like gazettes, with the singer relating the story of a lover, the accused, the wronged, and the cruelty of fate. Public hangings were as much entertainment as they were a reckoning - sound like a reality show? Dyad sees the correlation between events of the past and those of the present day, taking on the role of storytellers for a new generation of listeners.

The Vancouver, B.C. trio of Kori Miyanishi (vocals, banjo, guitar, fiddle, jaw-harp), Leah Abramson (vocals, guitar) and Shiho Mizumoto (fiddles), came together to play traditional American Old Time music after delving into everything from indie-rock and punk to classical and traditional music of various cultures. With the release of their second full-length CD, No Pedlars or Preachers, in 2006 on Copperspine Records/Festival, Dyad continues their stark and haunting sound, though a line-up change (Leah Abramson replaced Stephanie Custer in 2004) takes the band further into a traditional country and stringband approach.
Website: www.dyadband.ca

The Mountain Bluebirds play mostly bluegrass music, mostly in western Canada, and mostly in the evening. The Mountain Bluebirds always provide a good time for anyone in earshot, always mind their manners, and always look sharp on stage. Much of the music was written by members of the band and includes brisk fiddle tunes, songs from the heart, songs from the feet, songs about hope, chance, bends in rivers and even good meals. Hugh Ellenwood, Matt Kennedy, Brad Gillard, Val Bailey, Lorraine Cobb, and Connie Thiessen. Website: www.mountainbluebirds.com

The Breakmen's unique blend of acoustic roots, blues and bluegrass music, in combination with three- and four-part vocal harmonies, have put them in a category of their own. Appealing to a varied range of musical tastes and presenting their original material with a contagious energy, The Breakmen can have a venue erupting in dance within a song. Be it bittersweet ballads, soulful shakers, or upbeat foot stompers, their creative approach to songwriting and showmanship is fresh and exciting. Ben Rogalsky, Lee Watson, Matt Lawson, and Archie Pateman. Website: www.thebreakmen.com

Plough was formed in the hills of East Vancouver in 2005 and play a mix of traditional, contemporary, and original tunes in the folk/old-time tradition. Plough are: Karla Mundy, Linda Bull, James Scholl and Patrick Metzger.
Website: http://www.myspace.com/ploughtheband