Four of the bands featured in the CD appear in this concert: Dyad, The Breakmen, Plough and Redgrass. Website: www.whiskeyhollowbound.com 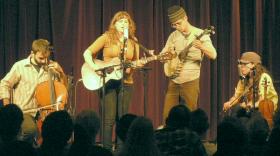 Old songs, new songs - obsessed with both obscure songs and creating their own sound, Dyad approach traditional American music with confidence and taste that has had music critics praising and listeners engaged. "So, are you from that area?" may be the most common question asked after shows. Years of studying old recordings and sitting around just playing and singing, theirs is music to soak up, to inhale. All three musicians arrived at old-time music from assorted musical backgrounds - classical, metal, indie-rock, punk, folk - maybe it shows, but probably it doesn't. As one reviewer put it, "The trio delivers their music straight up with few concessions to modern taste" (John Endo Greenaway, The Bulletin). Their debut recording, Who's Been Here Since I've Been Gone garnered praise from Penguin Eggs Magazine (Canada) and fRoots (UK) while their second full length, No Pedlars or Preachers is out now in finer record shops and through Festival Distribution in Canada. 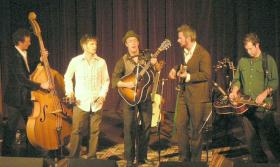 The Breakmen's unique blend of acoustic roots, blues and bluegrass music, in combination with three- and four-part vocal harmonies, have put them in a category of their own. Appealing to a varied range of musical tastes and presenting their original material with a contagious energy, The Breakmen can have a venue erupting in dance within a song. Be it bittersweet ballads, soulful shakers, or upbeat foot stompers, their creative approach to songwriting and showmanship is fresh and exciting. Ben Rogalsky, Lee Watson, Matt Lawson, and Archie Pateman. 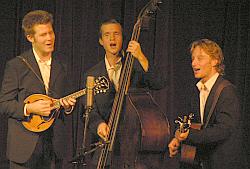 Drawing on a wide range of bluegrass and old-time material Redgrass embodies the high lonesome sound made popular by the old brother duets. This duo's predilection for fast tempos and bluesy harmonies makes them an exciting act to hear live. Their quirky and original tunes come to life with Kris Boyd's honey-coloured rumble, Sean Cronin's solid groove, and Steve Charles's fiery pickin'. 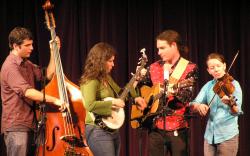 Plough was formed in the hills of East Vancouver in 2005 and play a mix of traditional, contemporary, and original tunes in the folk/old-time tradition. Plough are: Karla Mundy, Linda Bull, James Scholl and Patrick Metzger.