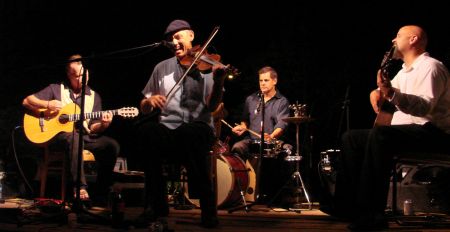 Willie Royal of the widely-loved Willie and Lobo gypsy boogaloo duo has teamed up with Bill MacPherson of Native Vibe to head up Willie Royal and the Locos. They'll play Willie and Lobo tunes as well as an eclectic mix of music that will venture into flavors such as funk, jazz, salsa and world with a little Middle Eastern flavor. Other members of the quartet are Southern California based drummer and producer Danny Campbell and Native Vibe's Dave Curtis on bass.

There are only a handful of true legends in this genre of music and Willie and Lobo are certainly among the best. Lobo retired from touring last year, but Willie, known for his high-energy performances, is back with a new group. You will get the old Willie fire but with added guitar, percussion and bass. "I've been playing 16 years with Lobo and it has been a great journey. I look forward to be able to venture into styles of music that bring in my whole history with Lobo and beyond. I might even play the Orange Blossom Special as I have played a lot of bluegrass music in my time, too. One thing is for sure, it will be a great adventure!" — Willie Royal

Willie started with classical violin training from age 8, graduated to country rock jams with Gregg Allman and Dicky Betts in Florida, and then began his musical travels around the world. In 1983 he met Wolfgang Lobo Fink in Mexico, and "gypsy boogaloo" music was born. Willie & Lobo played at the Rogue many times over the years, and proved to be a very popular draw.

Bill MacPherson of the acclaimed world music group Native Vibe is featured in Willie's new quartet. He was raised in the Congo by medical missionary parents and heard many African music styles there, giving him a thirst for travel and an appreciation of different cultures, peoples, their music and their languages. He speaks French, Spanish, Lingala and Kituba. His guitar styles are solid in rock, jazz, world (particularly African), Brazilian, Latin, Spanish, country, bluegrass and blues.

We can't wait to hear the new band, and look forward to hearing a few tales of encounters with Willie & Lobo in San Miguel de Allende in Mexico (it's amazing how many people first saw them there. Those folks are equally amazed that Willie continues to play at our cozy dance hall, too. We like it like that!)