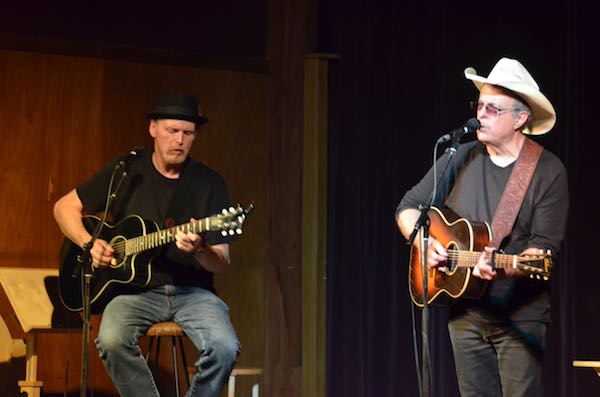 On this day in 2015 we had just returned from a  trip to Ireland, including a visit to the country town of Roscrea (see Steve's Blog for details!) The town was the setting for part of the story The Rose Of Roscrea, the latest epic recording and booklet by the famed American songwriter Tom Russell  who came back to town for a two-night engagement at St. James - accompanied by Portland guitarist Thad Beckman.

In 2004 we helped promote and present a show at St. James to mark the 10th anniversary of free elections in South Africa, featuring the wonderful songwriter Vusi Mahlasela with special guests Feso - Vancouver's Zimbawean roots band. See page 4 of our June 2004 Rogue Folk Review for details.

Versatile American roots musicians Cathy Whitesides and Hank Bradley covered a range of music from Celtic to Balkan to Greek - and more - and they graced the cover of our June 1993 Rogue Folk Review to announce their concert at the Wise Hall.

There were two major announcements that month: no minors were allowed at Wise Hall events any longer (we didn't realise until then that the permanent liquor license for the lounge and the lack of a fixed, lockable door between floors meant that we could not have a Special Occasion License for events in the hall), and, at the request of musicians and many of our patrons, we made all events in the hall No Smoking! Kinda hard to believe we've been running long enough to find smoky rooms were the norm once upon a time, eh?

The June 1992 Review was packed with information about the Rogue, the Wise Hall, and even Seattle's amazing Folklife Festival. On page 2 you can also read about a concert at the Wise Hall with English singer / songwriter and BBC Radio Stoke host Harvey Andrews  Such a wonderfully warm performer, with a hatful of catchy songs. The opening act that night was Jiggery Pokery, Vancouver's English ceilidh band. I played bodhran and snare drum in that band all those years ago! It was a lot of fun. The band eventually morphed into Rattlebone Band  who's till play English - and Welsh - ceilidhs at The Cambrian Hall or the Billy Bishop Legion.

Finally, the delightfully wacky Canadian Slavic quartet The Romaniacs performed the second of their three nights at The Savoy. See our fledgling 1987 newsletter for details.