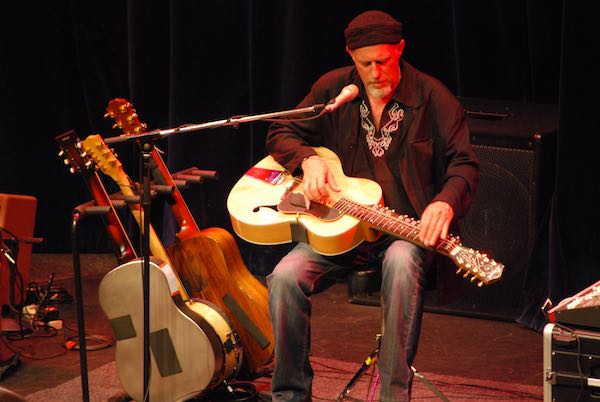 In 2010 Saltspring Island's blues guitarist / Indian mohan veena player Harry Manx played at Capilano University's North Shore Jazz Series during the Vancouver International Jazz Festival. We assisted with the promotion of this concert, so it was in my blog, but above all we had a couple of free tickets (yay!) and I took some photos.

Back in 2004 we helped North Shore Jazz promote a show at North Van's Presentation House with Jim Byrnes and Zubot & Dawson  Hard to believe they could play in such a small venue, but in 2004 maybe this was about right. Scroll down to Page 4 of our June 2004 Review for concert details.

On the cover of our June 1999 Rogue Folk Review you'll find a concert blurb about Laurence Juber  the brilliant English guitarist who played with Paul McCartney & Wings for many years. LJ played this show at the Wise Hall, with an opening set by the extraordinary American singer songwriter / poet Annie Gallup making this evening truly memorable!

Go back a further decade to 1989 and you'd have found The Sunday Umbrella Band hosting a trad Celtic session at The Railway Club. This event was given a mere two-line listing on the back page of our June 1989 issue.

Even further back, in 1987, The Romaniacs commenced a three-night stand at The Savoy. Great band, but not many bands could enthral me for three whole nights with three sets. Not many, but possibly this crew could have done it; they were exceptionally entertaining! Some details can be found on the front page of our fledgling newsletter.