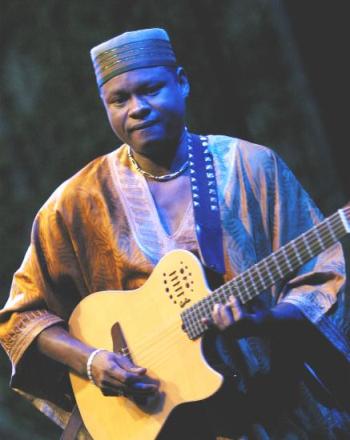 Guitarist and singer Alpha Yaya Diallo, from Guinea in West Africa, is one of the hottest acts on the current world music scene. Now based in Vancouver, Canada, he's earned a matchless reputation internationally for the excellence of his musicianship and the excitement of his live shows - whether performing solo or with his band Bafing. Diallo is a uniquely multi-talented artist. His dexterous acoustic and electric guitar-playing, with its fluid melodic lines and compelling grooves, places him in the front ranks of African axemen. In addition he is a skilled and experienced performer on a variety of percussion instruments, and on the balafon (traditional wooden xylphone). To complete the abundance of riches Diallo writes his own compositions, and sings with a supple and beautifully modulated voice.

Alpha will perform with his acoustic trio. His latest CD is the magnificent Juno-winning album, Djama (Jericho Beach Music)