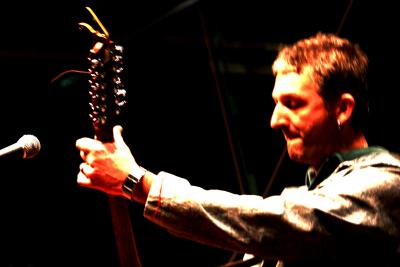 Singer-songwriter Andy White carries a 12-string guitar under his arm and wears his particular brand of Irish charm on his sleeve. With the political edge of Billy Bragg, the romance of David Gray and the Celtic lyricism of the Waterboys, Andy is a fully paid up '21st Century Troubadour' (and that's also the title of his first book, recently published in Ireland to rave reviews).

Belfast born and raised, White has earned a global following for blending folk and pop stylings with a poet's sensibility. Working with the great names of Irish music - Sinead O'Connor, Van Morrison - and writing with the likes of Peter Gabriel and Neil and Tim Finn, Andy has won Ireland's top songwriting awards and toured the world many times over.

Andy's latest release Songwriter is his tenth studio album. Released on Floating World in Europe and slated for release by Judy Collins' Wildflower Records in North America later in 2011, it was recorded in Vancouver with members of the Be Good Tanyas, Neko Case's band, and features special guests Allison Russell from Po' Girl on vocals and Radoslav Lorkovic on piano.

As well as touring Songwriter and his second book 21st Century Troubadour (Lagan Press), Andy is preparing for the release of the eponymous debut album from Fearing & White, his collaboration with Canadian singer-songwriter Stephen Fearing.