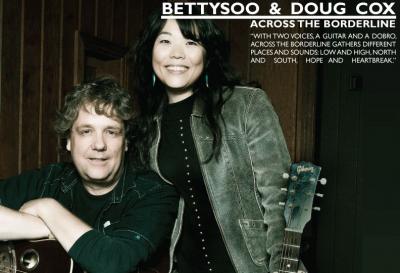 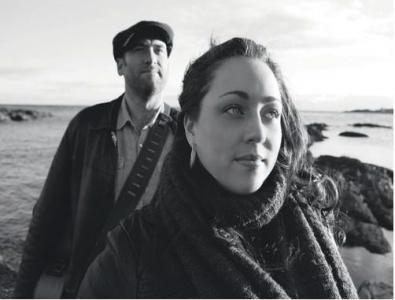 BettySoo and Doug Cox (aka Across The Borderline) might seem an unlikely pair. One hails from the cadre of songwriters living in Austin, Texas, the other from the paradisiacal reaches of Vancouver Island, British Columbia. The two musicians met while teaching at Acoustic Alaska Guitar Camp, where they discovered a shared fondness for good songs.

Living 2,500 miles apart (a couple airplane flights plus a long ferry ride) and working in different musical worlds aren't circumstances that make for convenient collaboration. But their friendship and musical respect were immediate, as they found countless familiar threads in the people and music they admired. Some songs they shared were penned by writers celebrated around the world, others were lesser-known, and still others were written by dear friends. BettySoo and Doug decided to create a show built around the stories and work of their mostly-unsung heroes.

Raised in Texas, BettySoo grew up hearing the names and music of certain Texas icons - characters like Doug Sahm, who lived on Vancouver Island for two years in the 1980's after visiting his friend Doug Cox. It was during Sahm's time on the Island that he penned "Louis Riel" and fashioned the idea of returning to Texas to form the Texas Tornados. Cox was road manager for the first tour leading to the formation of the now legendary band. Sahm's "Louis Riel" was written about one of the most celebrated underdog folk heroes in Canada and leader of the Métis rebellion. The touring and recording BettySoo and I plan to do is based on all the stories and songs we have each collected over years of being surrounded by great characters. says Cox, Lots of these songs are in danger of disappearing if they don't keep being sung. Keeping these songs alive is what we intend to do with Across The Borderline.

Another songwriting hero from Texas, Betty Elders is often considered the gold standard of female singer/songwriters. With songs recorded by Joan Baez and Lucinda Williams, it is strange her name is not as recognized as it should be. 'Light in Your Window' purrs like a classic; says BettySoo, it's a song that transcends generations and time periods, recalling countless stories of insecurity, jealousy, and heartache. It's a demanding piece in terms of emotional delivery: the melody is so pretty, your first instinct is to just kind-of float it out, but that's not what the lyrics demand. I love a song that pushes you to get inside the story.

Not much about BettySoo isn't surprising. Plain-faced, petite (clocking in at exactly five feet) and freckly, people have no idea what to expect when this young Korean-American takes the stage; they certainly do not expect her large voice and deeply moving songs.

One doesn't find one's self in such esteemed musical company without some serious chops, and Doug's got those. Less often remarked upon but every bit as important is the fact that Doug Cox has "big ears."

And everybody's talking about Cox - newspapers including The Toronto Daily Star and The Boston Globe, music magazines including Folk Roots, Guitar Player, and Acoustic Guitar - and all kinds of other folks. Described as "brilliant," "stunning," "ground-breaking," "virtuoso," and "a musician's musician," it comes down the the same message: his journey is worth watching.

Some people are born to play music. By the age of three, Ivonne Hernandez was playing violin by ear, everything from her mother's favourite Maritime reels to her father's Chilean folk music roots. A child prodigy, she soon was playing guitar, piano, cello, flute, and percussion before joining Daniel Lapp's BC Fiddle Orchestra. While still in her pre-teens, Ivonne played on the Orchestra's Fiddleharmonic CD and before 60,000 at a Commonwealth Games performance with the Crash Test Dummies.

Ivonne Hernandez has mastered Canada's traditional fiddle music. She embodies the country's 21st century multiculturalism, and her music reflects the new century's marriage of cultural influences. The young fiddler transforms her folk music roots into an exciting and dynamic new form. For this gig she has teamed up with Victoria-based singer / songwriter Jeremy Walsh (formerly with Scruj MacDuhk in his native Winnipeg) an excellent guitar accompanist with a powerful voice and a fine collection of original and traditional songs. Looking for something new in folk music? This is it!