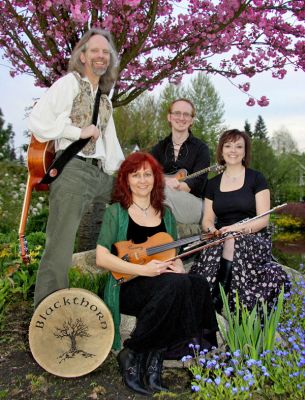 Vancouver Celtic band Blackthorn is delighted to announce the release of their latest CD, Sweet Forget-Me-Not. The CD launch will once again be a Rogue Folk Club show - the last time they released a CD they sold out our venue. The new CD features a diverse selection of Scottish, Irish and Canadian songs and instrumentals with strong vocal performances and accomplished playing from all the band members.

SFMN is Blackthorn’s 1st release since the passing of band mate Graham Carver in May 2006 and the title track was chosen as a dedication to Graham. During the recording of the project, Dianne Foster was diagnosed with a terminal cancer. As was her nature, she kept her spirits up and determinedly worked to complete the project. She was able to share the joy of listening to the final product but this release proves to be bitter-sweet for the remaining members of the band. They were able to capture, one last time, some magical musical moments with their dear friend but are saddened with the realization that these are to be some of their last memories of her, making the sentiment of the title all the more poignant...

This CD confirms their status as a leading light in the Celtic music scene in B.C. - and beyond. Blackthorn will go on, from strength to strength.