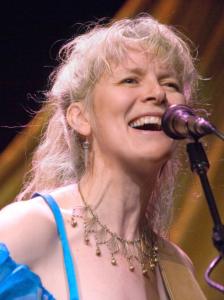 Pam Delgado, Jeri Jones, Renee Harcourt and Monica Pasqual - four distinct voices and musical backgrounds - make up the California quartet Blame Sally. The band has forged a compelling and original sound that has earned them the well-deserved reputation as a Bay Area phenomenon. The San Francisco Chronicle raved that Blame Sally's music recall(s) the artful romanticism of Jane Siberry, the rich folk harmonies of the Indigo Girls, and the percolating soulfulness of Joy of Cooking.

Blame Sally uses personal and topical issues to fuel their powerful songwriting and jubilant ensemble musicianship. Whether through the anguished voice of an Afghan war veteran, the cancer survivor finding some humour in new age bromides or the woman who's passion comes on like a summer thunderstorm, each track on Night of 1000 Stars is rich with authenticity and emotion.

In 2007 Blame Sally reached an audience of millions through XM Satellite Radio's Starbuck's XM Café where the band's previous album Severland charted at number one. Their anti-Bush/anti-war song and video, "If You Tell A Lie" is featured on Neil Young's Living With War website where it was number 2 in downloads for six months.

Blame Sally made their Rogue debut in September 2009, and, over a year later, people are still raving about how wonderful it was. They had recently released their 4th CD, Night of 1000 Stars, produced by Lee Townsend. The concert remains one of our favourites shows of 2009, and we can't wait to see them again!