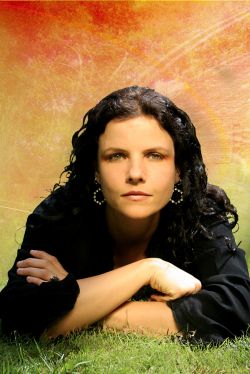 Corinne West's interest in music with a story was sparked by her grandfather who taught her to two-step in honkytonks when she was 11; and further informed by an array of adventures when she left home to travel across America on a converted school bus at 15 guitar in hand and wanderlust in full force. That nomadic journey with a cast of artists and activists led her to the creative musical road she now travels.

As a songwriter Corinne brings a subtle and sophisticated pen to her own hybrid of acoustic music ~ roots, rock, folk, and progressive country with a sprinkle of blues. From soulful ballads to hard driving road tales, laments to liberations, she evokes artists as wide ranging as Natalie Merchant and Johnny Cash, while crafting a sound and vision uniquely her own. Her dynamism on stage is gripping. She has toured heavily in the U.S. and won rave reviews. The other side of the Atlantic fell in love with her music when BBC legend Bob Harris began featuring her on his radio show. The success of her first tour in the UK and Ireland in early 2007 led to Corinne touring there twice a year.

The Promise is her third release. It's full of original songs that Corinne has written since the release of her last CD, Second Sight. The mood of the new CD takes a subtle turn from her first two records, with a more intimate sound focusing on her dynamic voice, and her songwriting. She co-produced this project with Canadian artist Doug Cox which has resulted in a refined North American blend. West & Cox brought in a stellar cast of musicians, including Rene Worst, Jennifer Scott, Daniel Lapp, James Nash, John Reischman, and of course Doug on various lap guitar instruments. "I toured many of these songs earlier this year in Spain and Scotland, and I am excited to have them recorded. It's not a new direction, but it's as if I'm now painting with a wider sonic brush." says Corinne.

Doug Cox is a roots music renaissance man. From his home on Vancouver Island the composer, multi-instrumentalist and music programmer has carved-out a diverse career as a recording artist, touring and session musician. He has played festivals, clubs, camps and concert halls across Canada, the United States and around the world from Seldovia, Alaska to the Baseball Hall of Fame (with Chuck Brodsky) in Cooperstown, New York and to the Sore Fingers Camp in England. Cox was the first Canadian Dobro player to be invited to perform at 'Dobrofest' in Slovakia plus the first Dobro player to be featured at the Montreal Jazz Festival. An acclaimed educator, Cox has produced a series of instructional packages to teach slide guitar, dobro and guitar playing. He also teaches at many festivals, and often gives workshops while on tour. We can't wait to hear these two fine performers working together in concert.