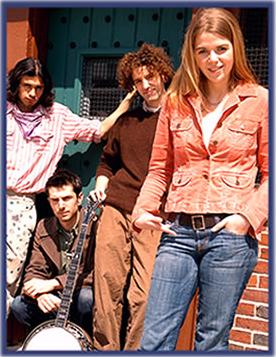 No electricity. No drums.

Meet Crooked Still, the hot young alternative bluegrass group on a mission to bend the boundaries of traditional music. The unlikely combination of banjo, cello, and double-bass drives this low lonesome band, whose captivating vocals and high-wire solos have enraptured audiences all over North America and Ireland since 2001.

As soon as we heard their music we were captivated! Glorious vocals, scintillating cello and the driving banjo of the guy who plays on the new Springsteen CD combine to make this concert an absolute treat for fans of acoustic music: whether you go for acoustic blues, bluegrass, old time or Celtic, you're going to become a fan of this band as soon as you hear them. We promise you that.