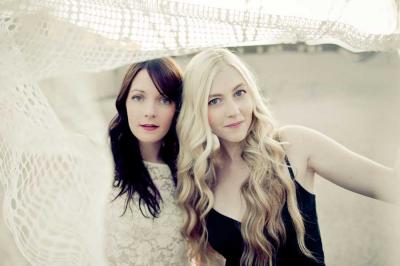 Dala seem bound for a loftier place where substance stands equal to style. - The Irish Times

Juno nominees and winners of the 2010 Canadian Folk Music Award for Vocal Group of the Year, Amanda Walther and Sheila Carabine of Dala write and sing in harmony best described as angelic. These two best friends met in their high school music class in 2002; they have since released five albums and toured extensively across North America. Darlings of the Canadian music scene, Dala are now poised to bring their fresh brand of acoustic pop music to the world.

Drawing upon influences like The Beatles, Joni Mitchell, Neil Young and Bob Dylan, Dala write songs that are both catchy and insightful. Amanda's ethereal soprano voice blends seamlessly with Sheila's velvety alto, creating the lush harmonies that have become their trademark.

There's nothing pretentious about Dala's music; it's stripped down and laid bare. That's not to say it is without polish - far from it. Sheila Carabine and Amanda Walther have worked hard to exploit every facet of their extraordinary musical blend, and it would be just as at home in a 1960s coffeehouse as it is now on the contemporary concert stage. - Andrew Craig, Host of CBC "Canada Live"

The sheer joy with which they perform is infectious, turning first-time listeners into instant fans. Dala are equally entertaining between songs, telling funny and down to earth stories that make every show unique. Dala have opened for artists such as Tom Cochrane, Stuart McLean of the CBC's Vinyl Café, Richie Havens and Arlo Guthrie. No strangers to the festival scene, they have also performed at The New Orleans Jazz Festival, The Edmonton Folk Festival, California's Strawberry Festival and Mariposa. In 2009, they were the only Canadian act invited to play at the 50th Anniversary of the Newport Folk Festival.

Dala's album Everyone Is Someone was released in 2009 to critical acclaim. It earned them their fifth Canadian Folk Music Award nomination, a Toronto Independent Music Award for Best Folk Group, and it was touted by The Irish Post as the Album of the Year. The song "Horses" was nominated by National Public Radio in the US as one of the "Top Ten folk songs of 2009".

Dala can sing! What beautiful flights of melody and harmony, reminiscent of the Everly Brothers, the Louvin Brothers, Emmylou Harris and associates; though Dala can trade a melody line and leave one wondering who is taking the lead and simply leave one behind when the harmonies kick in. - Peterborough Examiner

The live album was nominated for a 2011 Juno Award in the category "Roots and Traditional Album of the Year: Group".

Dala's latest album Best Day was released in June. It is without doubt their strongest album yet, showing increasing maturity in the songwriting, while retaining the freshness and charm of their earlier work. In July they were invited to sing Joni Mitchell's Both Sides Now with Welsh songwriter Martyn Joseph as part of the finale at the Vancouver Folk Music Festival. They also sang Live on The Edge On Folk that weekend from CiTR's broadcast booth.

Here is what Roughstock.com has to say about Best Day:

Dala might answer the unasked question, 'Where are all the young Emmylou Harris's?' This is because Carabine and Walther are so much more ambitious than many typical country singers. A prime example of what these two do so well is found on the album's title track. It's easy to give self-help advice by spewing out a predictable stream of clichés. It's far more challenging to turn such advice into poetry, however. On this one they sing, quite poetically:

When you grow up
You're going to be
More than you ever dreamed of.
And if you get lost
Lead the parade
And then you'll never be afraid.

They sing these deep words in a gently, slightly jazzy tone. However, the concept of leading the parade and learning to become self-sufficient, in order to fend off fear, is a heavy thought. This is so much more meaningful than merely saying, 'Just do your best.' Anybody can say that, and probably has. However, suggesting leadership as the best fearless life path is truly powerful.

Few will confuse Dala with diehard country music. Honky-tonk beer guzzlers won't likely dig them unless they're too gone to notice the subtle differences between folk music and country. However, great songwriting is what makes country music great most the time, and these two talented girls clearly know their way around a smart lyric and a memorable tune.

These gals sing so pretty, it's easy to take their songs for granted. Don't let the shiny wrapping distract you, however. Open up what's in the package, and this new album may well give you your best day in a long time.