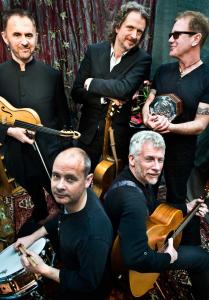 Music for the head, the heart & the trousers. And still improving in the bottle.

Since 2008, Oysterband has consisted of John Jones (voice, melodeon), Alan Prosser (guitars, voice), Chopper (bass guitar, cello, voice), Dil Davies (drums, cajón) and Ian Telfer (violin, concertina, etc). Oysterband make a modern, folk-based British music, acoustic at heart, sometimes intense, sometimes rocking. Since 1978 they've toured in 35 countries - festivals, concerts, bars, rallies, jails, bring 'em on! - and made 12 studio albums. Over the years they have morphed from a Ceilidh dance band to leaders of the "rogue folk" movement of the late 1980s (alongside Michelle Shocked, Billy Bragg & co.) In 1990 they teamed up with English folk diva June Tabor to record Freedom & Rain. Last year they recorded a follow-up with June, Ragged Kingdom, one of the finest Roots music albums of 2011 - or any other year. If you're diligent you can find a BBC recording of the Oysterband and June Tabor singing songs like "White Rabbit," "Wheels On Fire," and "All Along The Watchtower." (Those of us with long memories still recall - with great fondness - June's appearance on stage at 86 Music Hall on the Expo site in a chain mail vest to join the band for some incredible renditions of these and other classics.)

Throughout the Nineties and long into the Noughties, Oysterband recorded some wonderfully dark and brooding albums on the fringes of the folk / trad / Celtic scene - and the melodies became increasingly memorable and catchy. In 2008 they recorded Oxford Girl & Other Stories, revisiting 14 classics from their back catalogue in the more acoustic, stripped-down style that they now prefer. It's a gem of an album, as is their latest studio recording, Meet You There.

They won the BBC's Good Tradition Award in 2003 and were named Best Group by BBC two years later.

They now have an App available as a Free Download from the iTunes Music Store. It contains an ever-changing selection of songs and a comprehensive history of the band, as well as tour dates and details of how to get tickets to the shows. Just search for Oysterband in the iTunes Music Store and click on the Free Download button. Then enjoy countless hours in the company of one of the UK's finest ever Roots bands - but don't forget to come to the gig, cos seeing them Live is best!