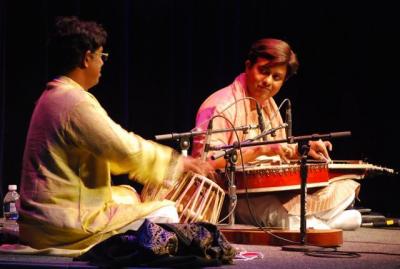 Debashish Bhattacharya is one of the world's most remarkable musicians, combining the evocative sounds of Indian raga with the slick and soulful sounds of western jazz and blues on a range of guitars seldom seen outside the sub-continent. As he explains, slide guitar was taken to India from Hawaii about 70 years ago. It chimed with the local musical tradition and a whole new art form was developed in Calcutta slide-Guitar.

Debashish began playing Hawaii lap steel guitar at the age of three and gave his first major concert on All India Radio when he was four. All his guitars are unique instruments designed by Debashish - the Chaturangui, the Gandharvi and the Anandi - all accompanied by his brother Subhasis on tabla. These slides represent three generations of instruments and a 1,000 years tradition of Indian music performed in a hypnotic and stunning style.

The brothers will team up with Bob Murphy - last seen at The Rogue playing Hammond organ with The Sojourners in June. Bob is also a piano virtuoso, and a few years ago he met Debashish and they formed a mutual appreciation society, vowing one day to work together. That day has come! Tom Keenlyside, a stalwart member of the local jazz scene, will add flute and sax to the mix.

We invite you to experience this unique musical fusion and revel in the majesty, grace, and power of one of the world's oldest musical traditions washing up and over and around western music in the air conditioned comfort of the new CBC Studio 700 theatre.