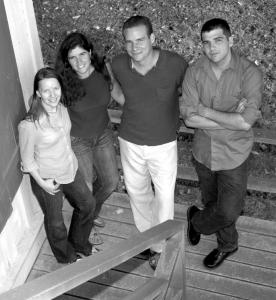 Plough is formed by four young, but seasoned, players who each picked up new instruments in 2005, added their warm harmonies, and set down musical roots in the evolving Vancouver scene. They starred in the Whiskey Hollow Bound concerts, first at the Anza Club, and then twice more at St. James Hall. They stole the show at the Phil Thomas celebration concert at the end of 2007. CBC Canada Live recorded their excellent set at the Mission Folk Festival in 2008, and last year they opened for Italian guitar master Beppe Gambetta at the Rogue.

Plough are Linda Bull on fiddle, banjo and vocals, Patrick Metzger (from Headwater) on upright bass, guitar and vocals, Karla Mundy (The No Shit Shirleys) on banjo and vocals, and James Scholl on guitar, upright bass and vocals. Their music is a compelling array of traditional and contemporary songs. Their vocals shine, occasionally acapella, more often in leads and duets. They will be accompanied by Tim Tweedale on dobro and Martin Fisk on percussion,

This concert marks the rescheduled launch of their eponymous debut CD.

Opening for Plough is Leah Abramson. You could say that Leah Abramson likes the sound of her own voice. She is, after all, the only voice amidst a heavenly chorus on her gorgeous, and largely choral album called The Abramson Singers. The album was supposed to be more of a conventional indie-folk album until the 28-year-old from East Vancouver got bored in the recording studio and started overdubbing her voice to see how far she could stretch her song's harmonics, two, three, four, all the way up to eight-part harmonies. By then it was clear she knew what she wanted to do with the new record. Without a band to weigh her down, she's free to follow whatever musical style, regardless how weird, strikes her fancy, be it a twist on the infectious barbershop quartet of "Take A Camera", a church-like hymn for "Trucker's Prayer" or Hawaiian ukulele luau of "Un Jeune Malade". Added to that is a sharply funny way with lyrics, as on "You Don't Love Me": You don't love me, you don't love me, you're as stupid as a record company.

Currently (February 2010) touring the country by train, Abramson was smart enough to sign VIA Rail as her travel sponsor. They took her across the country to Halifax and back as long as she and Sikula played a set in the club car once a day. The only request was that they only play Canadian songs. The most annoying thing was getting requests for Gordon Lightfoot songs we didn't know. We'd just play songs we like by Joni Mitchell, Great Lake Swimmers and Neil Young. It's good practice when you can play a rocking club car.