Tickets for the original show scheduled for March 30, 2009 are valid for this one. If you had them mailed to you and can't find them now, let us know, and we'll print you another.

The photo - taken by Steve Edge - shows Dougie and his guitar melting in the early evening sun at the Vancouver Folk Music Festival a couple of years ago! Way back in 1986, we were asked to present a Dougie MacLean concert. Expo 86 had just closed, and a huge vacuum had opened up - both for performers and for audience members, who had had so much opportunity to perform or applaud some stellar musicians for the previous 6 months. We booked the former La Quena coffee house on Commercial Drive and Dougie put on a wonderful concert, at one time playing guitar and didgeridoo simultaneously (was Xavier Rudd even born then??) there were only about 30 people there, but we all enjoyed it, and every time he's been back since we've had a full house. So book early! 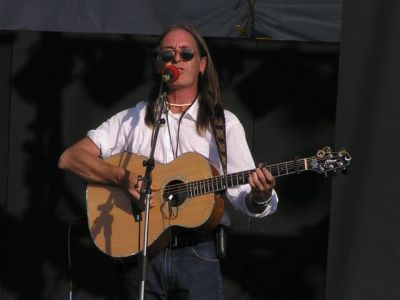 "...a Scottish phenomenon...with his exquisite guitar style, expressive voice and honest performance, his songs conjure up remarkably vivid imagery of our world" (The Performing Songwriter, USA)

2008 marked 25 years since the release of Dougie MacLean's album Craigie Dhu, on his own Dunkeld Records label which launched him as a solo artist after his early career as a member of the pioneering Scottish bands Silly Wizard and the Tannahill Weavers. And it was a stunning song from that album called "Caledonia" which made his music known to literally millions, when Frankie Miller's version topped the Scottish charts in 1992, prompting its widespread adoption as Scotland's unofficial national anthem.

During this time MacLean's resonant voice, melodic craft and timelessly soulful songwriting have been heard in formats ranging from full-scale orchestra to one man and his guitar, in concerts and festivals world-wide including New York's Carnegie Hall and London's Festival Theatre. His songs have covers by Paolo Nutini, Cara Dillon, Amy Macdonald, Kathy Mattea, Mary Black and Dolores Keane, among many others. His own most recent studio album, 2005's Inside the Thunder, was praised by Dirty Linen as "a delectable palette of colours and moods... sometimes wistful and melancholic, and at other times blissfully uplifting and rejuvenating." He has featured in 3 BBC TV Specials, has written for TV Drama and film (his tune "The Gael" featured in 20th C Fox "The Last of the Mohicans").

He is touring North America with his recently released double-disc compilation "The Essential Dougie MacLean", which includes tracks from 'Thunder'.

Described as " ...a musical hero" (Wall Street Journal) MacLean is renowned for the uniqueness of his meaningful, haunting and emotion- filled music.

"Strong yet subtle, hauntingly evocative yet contemporary in feel, this music demands listening to over and over again." (Time Out, UK)

This concert was originally scheduled in March. However, Dougie was left stranded in Anchorage, Alaska when Mt. Redoubt erupted several times, covering the town and the airport with volcanic ash. Dougie finally made it out of Anchorage, just in time to catch a flight to Scotland to perform "Caledonia" for 45,000 soccer fans at Hampden Park, Glasgow. Scotland won their World Cup match against Iceland that night, but it doesn't look as though they will qualify for the finals in South Africa next summer. Maybe he should sing for them every night... Fortunately, we were able to arrange another show exactly 6 months later. Tickets for the original show are valid for this one. If you had them mailed to you and can't find them now, let us know, and we'll print you another.