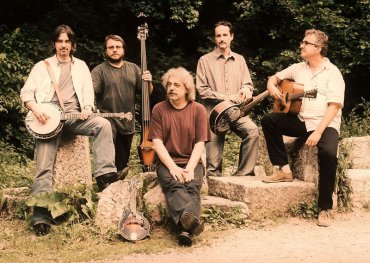 Only in this day and age could you find a Bluegrass band from the Czech Republic... I guess this is the upside of Globalization! Grounded in traditional bluegrass, and with a sound reminiscent of New Grass Revival, Druha Trava incorporates wide-ranging influences from Bill Monroe and Bob Dylan to Chick Corea and Czech opera. They have been crafting their own traditional folk-rock sound since 1991 when the band formed in its native Czech Republic. Their multi-instrumentation is solid and quite intricate in capturing the sound of Central Europe.

Druha Trava, which means "Second Grass," came together under the mind of international country/bluegrass star Robert Krestan. Krestan's love for the five-string banjo stems back to his love for Pete Seeger, who performed in Krestan's native homeland in 1982. Seeger's show pushed Krestan to seek out American folk, and he aimed to make it applicable in Czech music. He brought musicians Lubos Malina (banjo), Petr Sury (bass), Emil Formanek (guitar), and Lubos Novotny (dobro) to complete Druha Trava, and their tight sound has achieved global recognition, including awards for "Band of the Year" by the Czech recording industry. They scored gigs alongside bluegrass and folk forerunners such as Ricky Skaggs, Peter Rowan, Davy Spillane, and Béla Fleck as well.