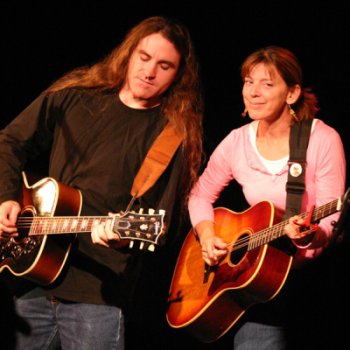 Texas songwriter Stacey Earle has come a long way since opening for her brother Steve on tour in Australia over a decade ago. She met her husband, Mark Stuart, who was the guitarist in Steve's band, and embarked on a career which started solo and has now blossomed into 3 CDs as a duo and worldwide acclaim for their intimate stage shows. Their harmonies are legendary, Mark is a stunning guitarist, Stacey's lyrics have that downhome, lived-in feel, and Mark writes great songs as well.

Stacey Earle's first show was on an arena stage in Sydney, playing rhythm guitar in her brother's band, Steve Earle & the Dukes, on "The Hard Way" tour in 1990. Playing before thousands of fans in a foreign country was not terrifying, she said. "It was magical. I knew right there and then I'm supposed to be doing this." She spent about a year and a half on tour with her brother, and then returned to Nashville to start a career of her own as a country/folk singer/songwriter. It was there she found she had a lot more to learn. "I was 30 years old and seeking a record- ing deal in Nashville at that age was like asking god to turn back the world clock." She would later land a Staff writing position with a publishing company. Then she met her future husband Mark Stuart. "I learned almost all the best of my musicianship from Mark exploring a wide range of influences, from blues to folk to rockabilly to country. Between the two of us we had a lot to show and tell. We still learn from each other day in and out." OrlandoCitybeat.com describes Stacey's voice as "...an unusual marriage of childlike purity and woman- from-the-hills mysticism."

Having grown up in a musical family, Mark has been playing professionally for years. The two have diverse styles of singing, writing, and playing, but they complement one another brilliantly. Stuart's guitar sets the performance in motion, while Stacey's voice seems to take it to new levels. Mark also spent some time in the Dukes in the 1990s. He recalls it as a time of glamour: appearing on The Tonight Show with Jay Leno, doing gigs with Neil Young. "I had someone tuning my guitar, strapping on my guitar," he said. "Now we carry our stuff 3 flights up in the Red Roof Inn."

Stacey and Mark found themselves inseparable from the beginning. Their Songs are the diaries of their life - good times and bad. They have released three duo albums, the latest being S&M Communion Bread. Their setup is a simple one - two voices, two guitars, and brilliant songs of love, passion, despair, loneliness, and joy. Their performances are gentle and affecting, but the music is complex, reflecting the experience of two battle-scarred veterans of the road.

We caught up with them in Memphis at the Folk Alliance conference in February, where they gave over their hotel room to showcase some of their favourite musical duos. They performed a few sets themselves, too, and played some old favourites, hammed it up a bit, and generally had a fine old time. They also demonstrated that they have a wealth of new material ready for a new CD in the next few months.