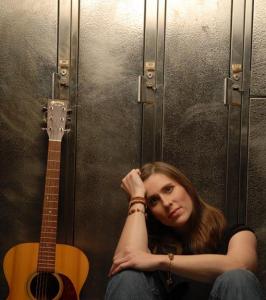 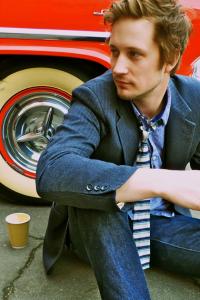 It's no wonder Cousins is the object of audience affection... -- The Boston Globe

A native of PEI, now residing in Halifax, Rose Cousins finds insight in solitude and strength in numbers. Supported by a thriving Halifax music scene and welcomed by an equally vibrant Boston community, her latest album We Have Made A Spark (2012) was made in the spirit of community and collaboration. We Have Made A Spark follows Cousins' two multi-award-winning albums The Send Off (2009) produced by Luke Doucet and If You Were For Me (2006) produced by CBC in Halifax. Yet another collection of stunning songs by Rose Cousins, her third album braves weighty topics.

We develop patterns that keep us from moving forward. It takes a deep breath and a bucket of courage to face the uncomfortable, painful things we work so hard to avoid. Reward comes from recognizing the obstacle exists and pushing through fear.

Rooted in authenticity and conviction of voice, from driving opening track "The Darkness" to stark piano ballad "Go First", you feel as though Rose Cousins sings for you, about your life. It is that sincerity that leads some to compare Cousins to our most beloved songwriters, and yet, her passionate delivery is distinctly, Rose. From writing songs in a tiny cabin without electricity on a New Hampshire island ("All The Stars," "The Shell") to the stage of one her many international tour stops her lone voice reaches out to listeners, all of us surrounded by our own forms of darkness, and charges us to have the courage to forge ahead.

Cousins' latest album, We Have Made A Spark, is nothing short of sublime and was justly nominated earlier this year for the Polaris Music Prize as Best Canadian Album. It didn't win but got lots of votes and is surely one of the best records made in Canada over the past decade let alone the past year. Think Joni Mitchell's Blue or any one of Cohen's poetic manifestos - Spark matches those Canadian classics in its compositional rigour and intense performances. -- John Goodman, North Shore News

Del Barber in his own words:

I am the son of a draft dodger. I grew up in southern Manitoba, balanced on the line that separates town from country. My heroes yielded hockey sticks and fishing rods. I was and still am reckless in everything that I pursue.

I woke up one morning at 19-years-old and I began to run. Any train, bus, road or trail, fuelled my desire to see more at whatever cost. I traded my athletic heroes for writers that died young. I chased Jack Kerouac's ghost across the continent, working dozens of jobs to get there. I planted trees in northern B.C., I served coffee and breakfast in Georgia, and I drove drug addicts to their court dates in Winnipeg. I've worked as mountain guide, janitor, construction worker, groundskeeper, landscaper, farmer, counsellor, ice-maker, teacher's assistant, driver, roofer, fisherman and more. I've worked in 15 states and 8 Provinces.

I chased after grandeur, found it fleeting. I tried to be a Buddhist, I tried to follow Jesus. I grew tired of rambling, I turned 23 and sought shelter in one of Chicago's north side neighbourhoods. I became addicted to open mic nights, embarrassing myself in front of strangers, singing half-cut versions of John Prine and Townes Van Zandt songs until way past last call. I would leave the bars feeling free and hopeful, clutching my guitar and my suitcase, smelling of cheap beer and stale smoke. It was always late and the streets were always vacant as I made my way, too late to catch a bus or train and too broke to call a cab. On one particularly long walk home in late October, I was bombarded by a smell and a feeling from my childhood, one that brought back memories that had been stowed away somewhere on the back pages of my subconscious. The wind came in hard off Lake Michigan and snow began to tumble out of the Chicago sky. The nostalgic tinge of home hit my gut and birthed in me a realization that I was somewhere I didn't belong. I knew at that very moment, all at once, that I would never be able to do anything but write songs and sing them from stage.

I left Chicago in a hurry, desperate to lean into home and the familiarness it brings. I began to remember who I was, and thus, began to write. I wrote hundreds of songs, I wrote with fever, urgency and naïveté, as if no one had ever written a song. I fell in love so many times, wandering and wondering around small towns trying to live like the characters in my favourite songs, wildly romantic, eager and full of youthful guile. I became increasingly obsessed with narrative and the cinematic quality of songs, the way they can give a person a definite sense of place, in a world built on alienation. I told stories and jokes, I preached and professed, singing songs for anyone who would lend me their ears. Hundreds of shows were logged, and hundreds of thousands of kilometres were driven. My world turned into a dashboard, a radio, a guitar and a pen.

I began to rub shoulders with my heroes. I traipsed across the stages of some of the country's finest music festivals. I've warmed up crowds for the likes of James McMurtry, Buffy Sainte-Marie, Taj Mahal, Richard Thompson, and John Hiatt. I found confidence, I began to learn how to captivate crowds, I leaned into the craft.

(My latest CD) Headwaters is about searching for the source of our desires, and the freedom that comes from understanding the ways in which the sources influence our directions. Rivers can't change where they begin, or where they run, neither can we change our histories or escape their influence on us. Headwaters is a collection of parables, hymns and manifestos, stories of love and loss, sadness and joy, threaded together by the search for an ultimate source. Headwaters is my third record in four years, and I'm as excited about music and song-writing as I've ever been.

I'm 28 years old, I'm a guitar player and a songwriter. Sometimes I preach, sometimes I rhyme. I know that I will never do anything but this. My world has turned into managers, agents, airports, festivals and promoters, but her source is still just a dashboard, a radio, a guitar and a pen.