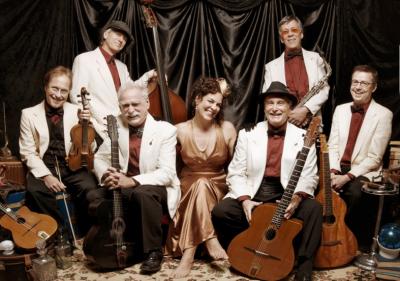 Deanna Knight landed the job as chanteuse with the Hot Club Of Mars by telling guitarist/band-leader/famed luthier Michael Dunn that she had made a CD of my own material, sung jazz standards with a big band, run my own singing telegram service, oh, and attended 54 Grateful Dead concerts. Michael said: you're hired. Let's play some tunes! The Hotties, as they are affectionately known, like to think of themselves as extraterrestrial musical raiders. They boast a triple threat on gypsy guitars: Michael Dunn, Steve "Bugsy" Szabo and Don Kellett, with bassist Charlie Knowles, violinist Tom Neville and sax / flute / harmonica wizard Mark Dowding completing the line-up. They are launching their new CD, Kiss Of Fire, at this opening concert / cabaret.The new CD includes two scorching hot tunes penned by Don Kellet, and some sultry Brazilian rhythms, too. Tom Neville - who joined the band after they released their debut CD Gypsy Fire - really excels on the new tunes with some inspired solos. And Deanna Knight's voice soars and weaves its magic around classics like "Lover Come Back To Me," "J'attendrai," and the sensuous tango rhythm of the title track.

The Dusty Flowerpot Cabaret will begin the evening on Friday with their 30's style choreography. They will also provide free swing dance lessons at the start of each evening.