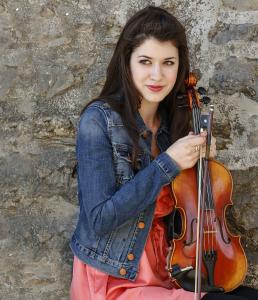 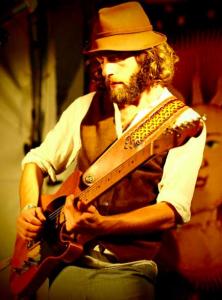 On stage, 17 year old award winning performer Kiérah - doesn't dance and she doesn't sing but she sure knows how to play the fiddle! After 13 years of classical training (receiving Canada's highest mark on her RCM Performance exam) combined with 12 years of learning and performing Celtic fiddle music... Kiérah is a "fiddler extraordinaire". Inspired by the heartfelt playing of Martin Hayes, her own playing radiates the love she has for traditional (and not so traditional) Celtic music - always playing with the clear and precise intonation for which she is known.

After spending last summer in Ireland, she was further inspired by the music, the musicians, the history and the kindness of the people - much of which is reflected on her new release - Stonemason's Daughter. As a prolific composer, Kiérah has published B.C.'s first book of all original fiddle tunes and features 15 of them on her new CD.

Adam Dobres is a natural born guitarist with a sensitive ability to embody any style of music. From classical, to jazz, to Celtic, he can do it all. He has travelled all over the world with such notables as Ruth Moody, The Bills, Oliver Swain, Toni Childs, Daniel Lapp, and Blue Rodeo. Adam is always energetic and creative in expressing his love of life and music through his guitar.

Kierah and Adam, as well as multi-instrumentalist/producer Adrian Dolan really hit it off musically and created Kierah's brand new release, Stonemason's Daughter. Adam is an amazing guitarist, and did a superb job at making his guitar playing unique to each set. He feeds so well into Kierah's exceptional fiddle playing, and together they create a fantastic, full sound. Taking traditional tunes and combining them with Kierah's original tunes, they give even traditional tunes a current, modern feel. Celtic meets contemporary with this exciting duo!