Ralph Shaw - King of the Ukulele 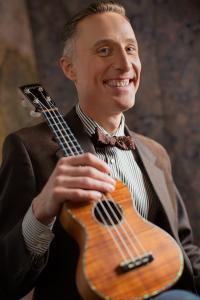 If you've ever seen Ralph Shaw you'll know he is an unparalleled showman with a knack for engaging an audience. His music has been described as hilarious, inspirational, outrageous, touching, and thought provoking. See him perform original songs from his two new albums (produced by multi-award winner Steve Dawson) accompanied by some of Vancouver's finest musicians.

His Love CD: a collection of songs about every aspect of Love: finding Love, the exultation of falling in Love, lost Love, the comfort of a long term relationship and the transcendence of eternal togetherness.

The Laughter CD covers subjects as diverse as conversing with dogs, the childhood friend who became handyman at the Mustang Ranch (Nevada's famous legalized brothel), the building of a ukulele case, the British vicar who got his legs waxed for charity, the art of learning to yodel and more moments from his unusual life as Canada's "King of the Ukulele."

Ralph's critically acclaimed book, The Ukulele Entertainer, his many CDs and ukulele instructional DVDs have delighted, and transformed, thousands of new ukulele players. Experience the performer who entertained Prince Edward, Earl of Wessex, for the 2010 Winter Olympics. And be royally entertained by The King of the Ukulele himself!