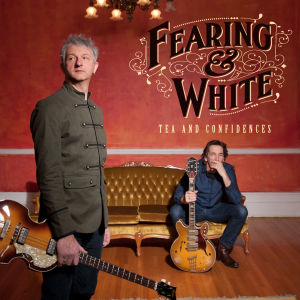 Canadian singer-songwriter Stephen Fearing met Belfast troubadour Andy White backstage at the Winnipeg Folk Festival in 1998. Forming an instant friendship, the two musicians began a series of yearly co-writing sessions at Fearing’s home in Guelph, Ontario. At each get together, they would play a few shows and spend the rest of their time together trading lyrics, melodies, harmonies, and arrangement ideas, slowly crafting a body of songs that was uniquely different from either of their solo work. After a decade of these informal sessions, they bit the bullet and recorded their acclaimed 2011 debut, Fearing & White.

For their follow-up, Tea and Confidences (LowdenProud Records), Andy and Stephen decided to take a different approach to the creative process. With Fearing having recently relocated to Nova Scotia, and Andy living in Melbourne, Australia, it was going to require planning. The new album started with an intense songwriting session one Halifax New Year. They reconvened later that summer and wrote the bulk of the new album in one incredible four-day sprint of inspiration between two west-coast festival weekends in Vancouver and Salt Spring Island. Six months later, they booked back into The Cottage studio in Guelph, with veteran drummer/percussionist Gary Craig (Bruce Cockburn), and special guests Jeff Bird (Cowboy Junkies) on harmonica and Ray Farrugia (Junkhouse) on drums.

With over twenty albums between them, Fearing & White have little to prove to anybody. That doesn’t stop Tea and Confidences from being an incredibly strong statement about where each man is in their lives and the power of collaboration. The music is rich in big tones and the pure excitement of creation. Over the course of the album, they reach uncommon heights as a duo and simultaneously reinvent themselves musically. The songs affirm with humor, hard-won optimism and a rocking worldview, all the while keeping a mature grasp on love and life without illusions.

Stephen and Andy are music lifers who can bash out guitar-driven rock numbers built around jukebox-ready grooves (“We Came Together”, “Sanctuary”) and just as fluidly, pare things down to aching harmonies and no-frills arrangements on ballads (“Emigrant Song”,“Another Time Another Place”). On Tea and Confidences, it’s all brought to life with a spark, and the spirit of discovery hangs thick in the air.

Stephen Fearing is a multiple JUNO Award-winner who has become a hero of the international roots and folk scene through his acclaimed solo performances, as well as his work with the supergroup Blackie and the Rodeo Kings. He currently resides in Halifax, NS.

Originally from Belfast, N. Ireland, Andy White has been honored with many of Ireland’s most prestigious songwriting awards. He is an author and songwriter who has collaborated with Peter Gabriel, Sinead O’Connor and Neil and Tim Finn. Andy now calls Melbourne, Australia, home.