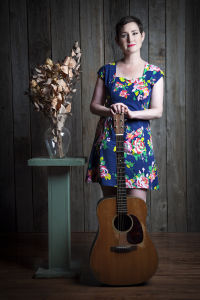 Namedropper marks a place in Oh Susanna’s journey where she has proven herself as songwriter and is now paying tribute to her comrades. Set for release October 7on Sonic Unyon, the album is a collection of covers from some of Canada’s most established and respected songwriters. However, no one will recognize a track on it as all of the songs have never been released.

Initially Oh Susanna, aka Suzie Ungerleider, imagined it would be simply an ordinary covers record, but when she approached her old friend Jim Bryson to produce the album, he hatched a new idea. “Suzie pitched me on doing a record of covers from people she knew, but I just heard ‘covers’ and immediately thought, ‘That sounds okay, but I’m not sure,’” explains Bryson. “Then on the spot I suggested having people write the songs. It was honestly just a random thought I vocalized, and dang me if it didn’t work out great!”

“Jim is always subverting,” says Ungerleider. “That’s not my tendency as a musician, I’m usually more classic in my approach but I wanted to be brought into this other space and that’s why I asked him to work with me on this record. I also wanted to sing other people’s songs in order to do music in a way I hadn’t done before. Jim thought that made total sense, but he immediately had the idea of asking people we knew to write something new for me.”

The process of making Namedropper went smoothly from its beginnings in 2012 up to its near-completion in the spring of 2013. It was then that Suzie received the difficult news that she had breast cancer. Her initial reaction was actually a sense of guilt that her ensuing treatment would put the brakes on what had become a highly anticipated musical project for her, her collaborators and fans. But the love and support from fans and friends only intensified over the next year as Suzie recovered.

Born in Massachusetts and raised in Vancouver, Suzie Ungerleider began performing as Oh Susanna in the mid-1990s, crafting a persona that matched the timeless qualities of her music, sounds that drew from the deep well of early 20th Century folk, country and blues, yet rooted in her finely-honed storytelling skills. Her superbly crafted songs often tell stories of troubled souls who rebel against their circumstances to attain a quiet dignity.