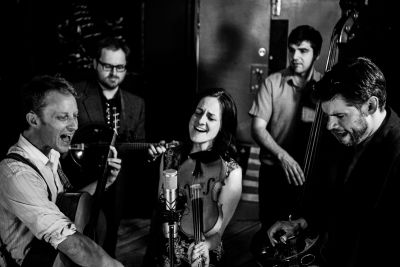 The Caleb Klauder Country Band represents the best of the Northwest music scene. Caleb has been touring nationally and internationally for over 15 years, first with acclaimed folk-rock band Calobo, a luminary in the Northwest’s burgeoning music scene, and then with the widely celebrated Foghorn Stringband.

Today, leading with vocals, guitar, and a mandolin, Caleb hosts some of the Northwest’s best singers and players creating a honky-tonk band that stands out as a totem in the country music scene. The band performs Calebʼs praised original songs right alongside classics from George Jones, The Louvin Brothers and Dolly Parton, all at once sounding timeless, fresh, and alive. There is a drive to his music that makes it unique and captivating. This is country music made for people who want to have fun and who want to dance, harkening back to the old dance hall days when people of all walks of life came together to simply dance, socialize, and enjoy live music.

Raised on Orcas Island, Washington and now living in Portland, Oregon, Caleb is a true Northwesterner, yet his maternal family roots lay in East Tennessee. His mother, originally from Knoxville, moved her family out west when Caleb was only a year old. These deep family roots contribute to Calebʼs music, tapping into old memories to bring you the strong singing and spirited attitude that give his music an edge that is both cutting and sweet.

Vancouver quintet VIPER CENTRAL will open the night. Viper Central is an acoustic stringband that takes that "high lonesome sound" to new places. Led by fiddler / singer Kathleen Nisbet and guitarist Steve Charles, the Vipers also feature Tim Tweedale on dobro and pedal steel, Patrick Metzger on bass and Mark Vaughan on mandolin. Their latest album, Thump & Howl, pays homage to The Chicken Coop, a South Vancouver venue that played host to all the country honky tonk stars of the 50s and 60s. All band members contribute original songs, but won't hesitate to deliver up their take on an ages-old mournful waltz or bring the house down with a barn-burning bluegrass standard.