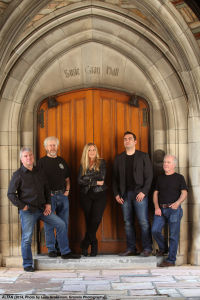 With founding member Mairéad Ní Mhaonaigh at the helm for nearly 30 years, Altan continues to be one of the most important live acts to play traditional Irish music in Ireland and on the World stage. Altan have toured all over North America and Europe. They also enjoy popularity in Japan where they frequently tour and have hosted Altan festivals in the middle of Tokyo to thousands of enthusiastic fans. From sensitive and touching old Irish songs to stirring jigs and reels, Boston Globe describes them aptly as “The hottest group in the Celtic realm!”

Altan show no signs of slowing down. In recent years, this Donegal band has been exploring and experimenting with their music using orchestral arrangements of their most popular pieces. In fact, Altan celebrated their 25th Anniversary with a symphonic best-of album release and tour of Europe with the RTE Concert Orchestra in 2010.

Altan played 7 times at the Rogue between 1989 and 1999, and we are delighted to welcome them back - at last! - to North Vancouver's Centennial Theatre with a brand new studio album - The Widening Gyre, recorded in Nashville with guest appearances by the likes of Tim O'Brien, Mary Chapin Carpenter, Bruce Molsky and Alison Krauss - and a special program commemorating the life and music of one of its founding members, Frankie Kennedy, who passed away in 1994. This celebrated Irish band features Mairéad Ní Mhaonaigh (lead vocals, fiddle), Ciarán Tourish (fiddle, tin whistle, backing vocals), Martin Tourish (button accordion, melodeon), Dáithí Sproule (guitar/vocals) and Ciarán Curran (bouzouki, bouzouki guitar).

Or buy your tickets at a Rogue Folk Club concert, with no Service Charges!